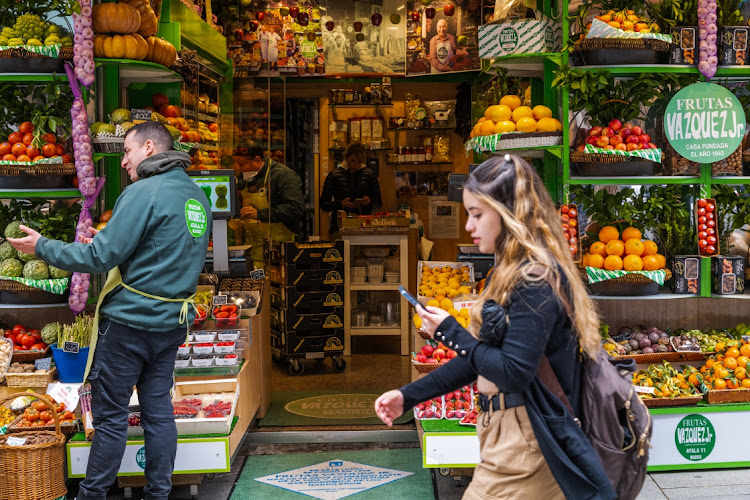 A vendor speaks with a shopper at a fresh produce store in Madrid, Spain, on Wednesday, April 20 2022. Picture: BLOOMBERG/EMILIO PARRA DOIZTUA

Even with inflation spiralling, consumers keep spending on everything from baby wipes to beer – at least for now.

That looks like good news for food and household-products manufacturers as well as supermarket operators, who are shaping up to be relative beneficiaries from higher prices.

On Wednesday, Procter & Gamble said organic sales – excluding currency movements and acquisitions – rose 10% in the three months to March 31, estimated to be the strongest in at least 15 years. The US maker of Gillette razors and Pantene shampoo also upgraded its forecast of organic sales growth in the year to June 30, from a range of 4%-5% to 6%-7%.

Swiss peer Nestlé has now followed with organic sales growth of 7.6% in its first quarter. Both companies raised prices by about 5%. Yet the volume of P&G’s Fairy dish soap and NestléNestle’s Nespresso coffee capsules that their customers bought held up.

P&G and Nestle share some similarities. The former sells Pampers nappies. History has shown that when times are tight, parents are more likely to go without their own needs rather than those of their children. In fact, they may even trade up to the most premium option. Nestle generates about a quarter of its sales from pet care. This too could prove highly defensive as those who acquired pets during the pandemic could be reluctant to cut back on their favourite food. Indeed, the Purina pet-care division was the largest contributor to organic growth, led by its most upmarket foods.

These firms aren’t alone in enjoying bumper sales. This week’s numbers from Danone, maker of Activia yogurt and Alpro oat milk, beat expectations. Heineken, the world’s second-largest brewer, sold more beer than expected, even though consumers had to pay more for their pints.

Investors should still be braced for some indigestion, though. For a start, consumer-goods firms face increased costs for the items they need to make their products, from packaging to palm oil. Despite the surging sales, profits may be little changed. P&G cautioned that escalating costs, primarily for commodities, would mean a headwind of $3.2bn after tax in the year to June 30, 2022. Its fiscal third-quarter gross margin fell by four percentage points, and it said that full-year core earnings per share would grow at the lower end of its 3% to 6% range.

It’s also worth remembering that these manufacturers tend to sell things that people need rather than simply want. The surprise slump in Netflix subscriptions demonstrates that consumers are prepared to trim expenditure where they can. That’s a risk for items they may consider more peripheral, such as fancy face cream.

Then there’s the danger that as prices increase further, more shoppers finally take fright and desert big name brands for supermarkets’ private labels. This has been happening to some extent already, but hasn’t yet taken hold.

P&G will raise prices in home care, feminine care and oral care in the US market this summer. Nestle will lift them further over the next few months. The Swiss group is monitoring the impact closely, and expects some shoppers to trade down.

Meanwhile, P&G is having to be more creative. Its marketing campaigns are stressing the benefits from more premium products that can help shoppers save money in other ways, for example laundry detergent that can get clothes clean in cold water, so lowering energy costs. It is also ensuring it has cheaper items in its ranges, for example in diapers, and is supplying the dollar stores in the US and hard discounters, such as Aldi and Lidl, in Europe.

As things stand, the resilience in food and toiletries shows there are some sectors that can withstand inflationary pressures. Travel is another part of the economy where demand is holding up despite hikes in the cost of hotels and airfares.

There remains a question over whether the industry can make customers fully absorb its own escalating costs. Consumers are not balking so far. But this could be as good as it gets for the manufacturers of food, toiletries and household products. There will come a point when shoppers say enough is enough.

CPI in March accelerates to 5.9%, while analysts say further tightening of interest rates is needed
Economy
2 months ago

WATCH: Inflation accelerates to 5.9% in March

Fund sees global expansion slowing to 3.6% in 2022, down from a forecast of 4.4% in January before the war in Ukraine, while inflation is forecast at ...
News
2 months ago
Next Article