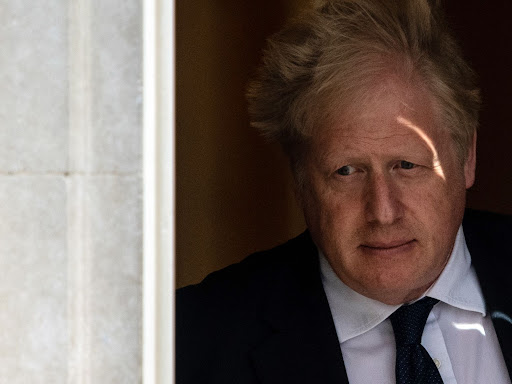 Boris Johnson abandoned a bid to delay a vote on whether the British parliament should investigate his past comments on “partygate” as opposition legislators accused him of lying about breaking rules during the pandemic.

The UK prime minister, who is in India pushing for a trade deal, is missing the debate, which started on Thursday morning in the House of Commons.

Opening the debate in the House of Commons, Labour Party leader Keir Starmer pushed for Johnson to be referred to a parliamentary committee over whether he misled the chamber, which is typically regarded as a resignation offence.

The government had tabled a counterproposal that would have seen any decision on a parliamentary probe put back until after a police inquiry and internal report into allegations that gatherings in Downing Street and other buildings breached the government’s own pandemic laws.

But the government suddenly withdrew its proposal, and allowed Conservative MPs to vote how they wish on Labour’s proposal. A person familiar with the matter said ministers realised that the issue could not keep getting pushed back, while another said Tories were worried about a repeat of an ethics row in 2021 that hurt the party.

That the parliamentary committee to investigate Johnson has a Tory majority  limits the risk for the prime minister.

Police fined Johnson for a birthday event in 2020 during the pandemic, when lockdown rules prevented people from visiting dying relatives in hospitals. He could face more penalties for other events.

MPs debated whether Johnson misled them in his account of events. Johnson and his officials have said repeatedly that his statements reflected his understanding of events at the time. By convention, a minister would resign for knowingly lying to parliament. Johnson has repeatedly said he is not stepping down.

“This is about honesty, integrity and telling the truth in this place. It is an important principle and it’s one we all share,” said Starmer.

“It is a principle that is under attack, because the prime minister has been accused of repeatedly, deliberately and routinely misleading this house over parties held at Downing Street during lockdown. Now that’s a serious allegation, because if it’s true, it amounts to contempt of parliament.

“We already know he has a case to answer”, said Starmer, contrasting Johnson’s assertion that no pandemic rules were broken, with the more than 50 fines issued by police to government officials for breaches of the regulations.

Johnson’s huge majority of 75 in parliament should have meant the government passed its amendment without much drama. But the Conservatives probably took into account that many Tory MPs are likely to miss the vote as they will already be in their constituencies.

Some Conservatives Tories would have been uncomfortable about being seen to have put off an inquiry, after Johnson’s own botched attempt to help a Conservative MP evade an ethics probe backfired in 2021.

Many Conservatives remain unhappy about Johnson’s gaffes and missteps, and how the row over Downing Street parties damaged their standing with voters. Johnson appeared on the brink of being ousted just weeks ago.

But the political calculus is also shifting as Johnson’s critics consider who will give them the best chance of keeping their jobs at the next election. Russia’s war on Ukraine and chancellor Rishi Sunak’s slumping popularity influenced their thinking.

Conservatives and Labour are starting to assume that Johnson will be running for a second term as they prepare for the election due in two years’ time.

On the plane to India, Johnson was pressed by reporters about what the British media has calls partygate. He sought to brush off the questions by suggesting voters have other priorities.

“Politics has taught me one thing, which is you’re better off talking and focusing on the things that matter, the things that make a real difference to the electorate and not about politicians themselves,” Johnson said. Asked whether he would fight the next general election, he replied: “Of course.”

Cabinet minister David Wolfson has resigned in the wake of the Downing Street party scandal. It’s a matter, he says, of the rule of law
Opinion
3 months ago

Bookmakers give Macron the odds for victory

Bookmakers give Macron the odds for victory