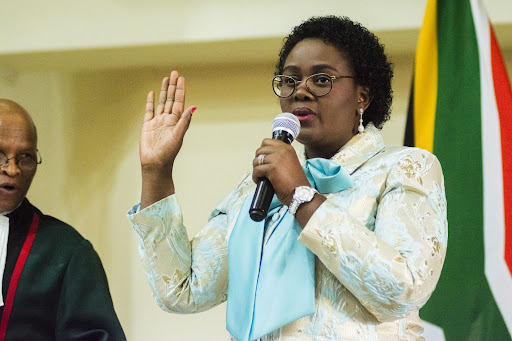 The ANC has appointed human settlements minister Mmamoloko Kubayi as its head of economic transformation.

Kubayi succeeds Enoch Godongwana, who relinquished the powerful party position after being appointed finance minister in August. A statement on Kubayi’s appointment will be issued later, ANC spokesperson Pule Mabe said by phone on Tuesday.

“The ETC subcommittee plays a critical role in driving our policy decisions around economic transformation, but it also assists in populating our responses on a number of economic interventions that are being undertaken in the country,” Mabe said.

Kubayi is currently serving as acting finance minister while Godongwana is in Washington attending the IMF Spring Meetings, the finance ministry said in an emailed response to questions.

She is co-chair of the cabinet’s economic cluster along with mineral resources and energy minister Gwede Mantashe. Kubayi has been touted as a contender for the position of deputy president of the ANC when the party holds its elective conference in December.

A former tourism minister, she faced criticism in 2021 for championing black-ownership as a requirement for access to a fund created to help the industry overcome the effects of the coronavirus pandemic.

Kubayi was appointed minister for human settlements in August. Her department will play a key role in relief efforts after SA’s worst flooding in almost three decades claimed more than 400 lives in two provinces and destroyed thousands of homes.

David Motau is accused of contravening the Public Finance Management Act and was released on R5,000 bail after appearing in the Bloemfontein ...
National
3 months ago

The chair of the cabinet’s economics cluster has blasted Telkom and other mobile network operators for delaying the release of high-demand spectrum ...
Business
4 months ago

The HDA has been weakened by leadership instability that has had a negative effect on corporate governance and overall performance, she says
National
8 months ago
Next Article