Fund sees global expansion slowing to 3.6% in 2022, down from a forecast of 4.4% in January before the war in Ukraine, while inflation is forecast at 5.7% in advanced economies and 8.7% in emerging and developing countries 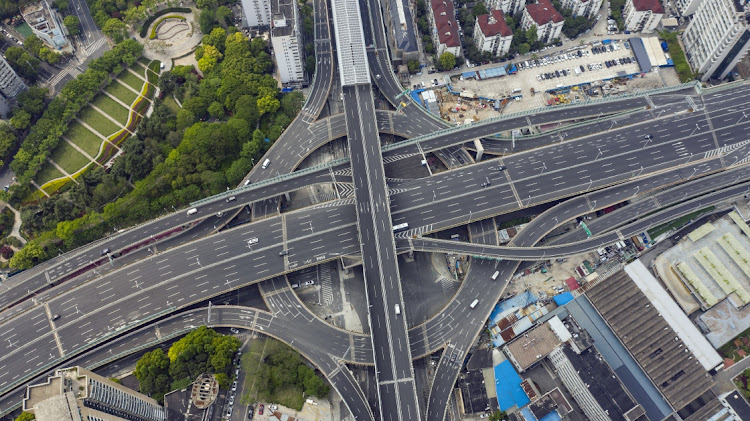 Nearly-empty roads during a lockdown due to Covid-19 in Shanghai, China, on Tuesday, April 19 2022. Picture: BLOOMBERG/QILAI SHEN

The IMF slashed its world growth forecast by the most since the early months of the Covid-19 pandemic, and projected even faster inflation, after Russia invaded Ukraine and China renewed virus lockdowns.

The fund sees inflation for this year at 5.7% in advanced economies and 8.7% in emerging and developing countries, significantly higher than just a few months ago. The pace of consumer-price increases is expected to slow to 2.5% and 6.5%, respectively, in each group of nations in 2023. The IMF said there was a risk that inflation expectations become unanchored, prompting more aggressive central bank tightening.

The Washington-based fund expects Ukraine’s economy to contract 35% in 2022 as a direct result of the invasion. Russia’s output may shrink 8.5% due to sanctions imposed by Western nations and a loss of confidence in the country.

But the impact of President Vladimir Putin’s aggression will spread far beyond the two countries. The invasion is sending commodity prices soaring, raising the cost of food and fuel, and stoking unrest and protests around the world, from Sri Lanka to Peru.

In the US and some parts of Europe, inflation is accelerating to the fastest level in decades, spurring expectations for central banks to tighten monetary policy faster than previously foreseen.

The war has led the IMF to lower GDP expectations for 143 of its member economies — a group that accounts for 86% of global output, MD Kristalina Georgieva said last week.

“In the matter of a few weeks, the world has yet again experienced a major, transformative shock,” Pierre-Olivier Gourinchas, the IMF’s new chief economist, wrote in a foreword to the report. “Just as a durable recovery from the pandemic-induced global economic collapse appeared in sight, the war has created the very real prospect that a large part of the recent gains will be erased.”

The euro area got a particularly sharp downgrade, with growth projected at 2.8% for this year, down from a previous 3.9% estimate.

The US is expected to be less affected by the war and grow 3.7% this year, down from a prior 4% projection, reflecting a faster tightening of monetary policy by the Federal Reserve.

China’s economy is expected to grow 4.4%, down from a prior 4.8% estimate. That also compares with the government’s official target of about 5.5%.

Overall, the IMF forecasts advanced economies will grow 3.3% and sees emerging markets and developing economies expanding 3.8%, down from prior estimates of 3.9% and 4.8%, respectively.

The IMF’s baseline forecast assumes that the conflict remains limited to Ukraine and that sanctions on Russia and European plans to become independent of Russian energy don’t tighten beyond those announced by the end of March. 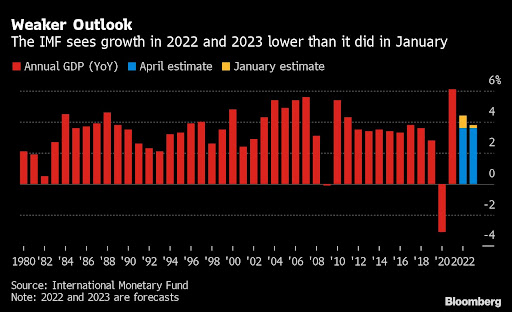 But unusually high uncertainty surrounds the outlook, and downside risks dominate. They include a possible worsening of the war, escalation of sanctions on Russia, a sharper-than-anticipated slowdown in China, and a renewed flare-up of the pandemic should new, more powerful Covid-19 variants emerge. Worsening supply-demand imbalances could lead to persistently high inflation that forces central banks to hike rates faster.

The fund models an alternative scenario where sanctions against Russian oil and gas broaden in the middle of this year, leading to higher commodity prices, disruptions to supply chains and tighter financial conditions for the rest of the world. In such an environment, GDP in the EU would be about 3% below the baseline scenario in 2023, with global GDP 2% below the baseline and activity remaining about 1% lower by 2027.

The IMF also flagged risks from rising debt levels in emerging markets, particularly as officials in advanced economies tighten monetary policy. Some economies will require sovereign-debt restructuring to free up resources for important health, social and development spending, with several countries having begun yet failed to complete the process through the Group of 20’s so-called Common Framework.