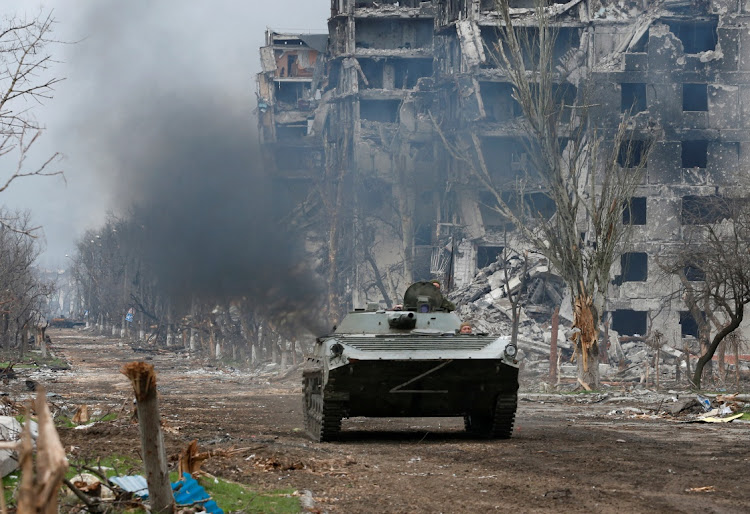 An armoured vehicle drives through Mariupol during fighting in the Ukraine-Russia conflict, April 12 2022. Picture: REUTERS/ALEXANDER ERMOCHENKO

The EU is planning to establish a solidarity trust fund to finance the reconstruction of war-shattered Ukraine as member states were told they should expect to pay the bulk of the costs.

The European Commission told diplomats it’s working on an EU instrument focusing on the long-term needs of the country instead of a multilateral tool since the bloc will foot much of the bill, according to people familiar with the discussion. Modelled on the post-Covid-19 recovery fund for member states, it would finance investments and reforms in agreement with Ukraine’s government, but it’s not clear how much would be provided through grants or loans, the people said.

Since the war is still ongoing, the EU executive’s arm isn’t willing to put a price tag on the task, but told EU ambassadors that the figure would reach hundreds of billions of euros over decades.

The topics of post-war reconstruction and possible war reparations are expected to garner attention over the next weeks as senior officials in Brussels and Washington plan to discuss ways to support Kyiv financially and to ensure that the enormous amount of money isn’t misused, EU officials said.

The World Bank will host a ministerial session on Thursday on Ukraine during the spring meetings of the International Monetary Fund in Washington. Commission vice-president Valdis Dombrovskis is expected to participate, an EU official said.

It’s hard for countries to move too far on any plan with Russian forces still attacking Ukrainian cities, but even if the war ends, there will be significant obstacles. Ukraine’s endemic corruption — and the lack of robust oversight mechanisms — are two of the biggest. The Netherlands has suggested that any new reconstruction tool could be used to help implement governing structures in the country that would bring it closer to the EU and smoothen its eventual accession path, the people said.

As a first step, the commission would conduct a thorough assessment of the financial needs together with the World Bank. The Ukrainian government estimates that the destruction of Russian forces in its territory amounts to $1-trillion.

Most of the initial aid would go towards rebuilding infrastructure and supporting the provision of public services. Ukrainian President Volodymyr Zelensky told commission president Ursula von der Leyen that his government needs $5bn to $7bn a month to cover salaries and other social expenditures.

The commission is also considering extending guarantees to help companies. Ukraine estimates that about one-third of firms have completely stopped their activities and 45% have reduced their production.

In particular, the war has hit the agricultural sector, one of the most central economic activities in the country, as big portions of land cannot be used, farmers face increasing costs and exports are hampered.

Some member states including Sweden and Slovenia have suggested exploring ways to redirect Russian funds to Ukraine, for example, by collecting the extra profits from high energy prices or using frozen assets of sanctioned Russian oligarchs.

The bloc has already disbursed €600m in soft loans since the war started and it is speeding up the approval of an additional €600m that could come by this summer, an EU official said. The EU is also working on an additional loan package that could be of a similar magnitude.

Separately, the IMF has approved $1.4bn in emergency financing for Ukraine while cancelling $2.2bn of Ukraine’s previous $5bn loan, since it was clear that Ukraine could no longer meet the reforms and conditions needed to receive the rest of that loan, including in fighting corruption.