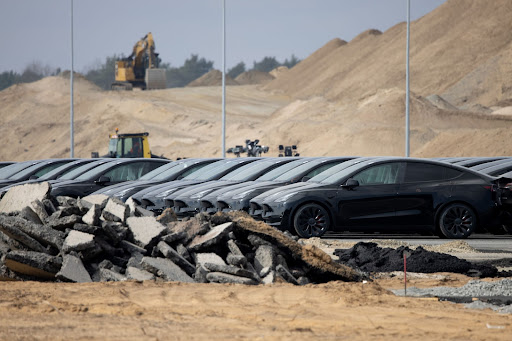 Tesla shares slipped on Thursday as investors absorbed the prospect of a new distraction for CEO Elon Musk.

Musk’s unsolicited $43bn takeover bid to take Twitter private is the first time he has attempted to buy a fully formed company of that size. His previous enterprises, which also include SpaceX and the Boring Co., have largely been built from the ground up in his image.

Tesla fell 3.8% in morning trade in New York. That's in addition to a 5.7% decline by the end of Wednesday since Musk revealed a stake in Twitter last week, more than double the decline in the broader S&P 500 Index over that time.

“As the CEO of a trillion-dollar company, Elon Musk should focus on Tesla and not waste time attempting to acquire and manage a $43bn company,” David Trainer, CEO of investment-research firm New Constructs, said in an email.

Tesla faces “significant competition” as major automakers are catching up on innovation in electric vehicles, Trainer said. Shareholders may be worried that Musk — the world’s richest person, according to the Bloomberg Wealth Index — would be pulled away from operations if his Twitter bid is accepted. Musk controls product decisions at Tesla and plans to start production of the Cybertruck, Semi and next-generation Roadster next year.

At the same time, Musk has a strong hand in SpaceX, which launched the first space flight with private astronauts last week. The company is a major contractor for NASA and plans the delayed Crew-4 launch to the International Space Station as soon as April 23.

Even if he has executives to help run his different enterprises, Musk is anything but a delegator. He has described himself as a “nano-manager” and handles almost all major decisions at his companies. When Tesla was having trouble getting the Model 3 production line going, he famously slept at the factory to oversee assembly.

Musk said on Thursday that he doesn’t have confidence in Twitter’s management, suggesting he isn’t likely to be hands-off if he succeeds in buying the company.

Another risk for Tesla shareholders is that Musk could sell some of his stake in the automaker to pay for the Twitter deal, according to Wells Fargo analyst Colin Langan. Musk owns about 17% of Tesla shares, valued at about $170bn, and Langan said in a research note that offloading some of them to pay for the takeover may put pressure on the stock price.

Musk’s offer for Twitter is conditional upon “completion of anticipated financing”, which Langan said implies that at least some portion of the purchase price will come from outside sources.