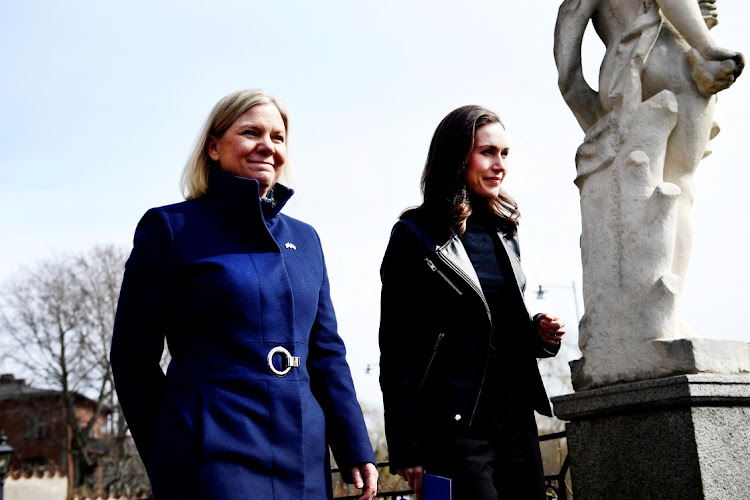 Finland started a process expected to lead Russia’s Nordic neighbour into defence alliance Nato in response to the attack on Ukraine, while Swedish media reported its ruling party now plans to follow such a move.

Finnish Prime Minister Sanna Marin said on Wednesday a bid to join Nato could be decided “in coming weeks” after the release of a report that cited better security guarantees via alliance’s mutual defence clause. Her Swedish counterpart Magdalena Andersson said Sweden is still analysing its options, declining to confirm reports about her party changing its stance.

Russia’s invasion of Ukraine in February pushed a potential Nato entry to the top of the agenda in both nations, which have long shunned membership even as they have clearly tightened co-operation with the bloc over the past years. Russia has repeatedly warned both with potential consequences, with President Vladimir Putin seeking guarantees against widening the bloc before the invasion of Ukraine.

Nato membership has become the preferred option for Finland, which has fought two wars with the Soviet Union and preserved independence it had gained from Czarist Russia during World War 1. The nation of 5.5-million, which in the past staked its security on fostering a trade relationship with Russia, concluded no such ties would now guarantee its safety.

While opinion polls in neighbouring Sweden reflect a similar change, its ruling Social Democrats have so far publicly opposed such a move.

While other Nordic nations belong to Nato, Russia’s full-scale invasion of Ukraine has also prompted them to reassess long-term security set-ups. Denmark will head to polling stations on June 1 for a referendum on joining the EU’s defence pact, where the country now has an opt-out. Recent polls suggest that support is slowly dwindling with roughly 40% support behind joining the pact and as much as 25% of voters undecided.

Earlier this week, Russia warned Finland and Sweden against joining Nato, arguing the move would not bring stability to Europe. Kremlin spokesperson Dmitry Peskov told reporters that “the alliance remains a tool geared towards confrontation”.

Ahead of its invasion of Ukraine, Russia demanded Nato agree to halt any future expansion.

Finland — which has the EU’s longest border with Russia — is now not experiencing an immediate military threat, but is preparing for the possible use of military force against it, the white paper said. While the document expectedly made no formal proposal to join Nato, it will provide the basis for discussions in parliament starting next week.

A potential entry application could be filed before the 30-member bloc is set to meet for a summit in Madrid June 29-30.

Defence Minister Antti Kaikkonen called for thinking about security for a much longer term — 30 or 50 years from now — saying the Nordic nation needs to figure out “how we best ensure that war never comes to Finnish borders again”.

The radical security rethink by Finland would be key to a potential similar step by Sweden, which shares no border with Russia but has been spooked by reports Russia could invade its Baltic Sea island Gotland in any operation directed against the Baltic Nato members.

Speaking at a joint press conference on Wednesday with Marin, Andersson reiterated her government is due to present a report in late May on its options following Russia’s full-scale invasion of Ukraine. She also said any future stance will include a continued close security alignment with Finland.

“We will continue our close co-ordination and co-operation, and we have to discuss different options, and no option is without risk,” Andersson said. “We want to analyse the situation to see what is best for Sweden’s security.”

Russia says over 1,000 Ukrainian troops have surrendered in Mariupol

Surrounded by Russian troops for weeks and the focus of some of the fiercest fighting of the war, Mariupol would be the first major city to fall ...
World
2 months ago