Macron and Le Pen eye 7.7-million people who backed Jean-Luc Melenchon, who finished third in the first round of tight French election 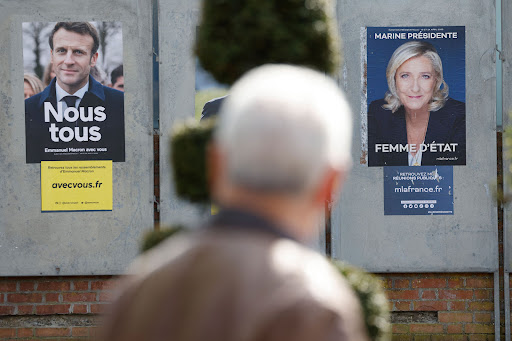 French President Emmanuel Macron and his nationalist competitor Marine Le Pen are doubling down on attempts to court left-wing voters as the race for the French presidency enters its final phase.

With less than two weeks to go before the runoff on April 24, Macron and Le Pen are eyeing the 7.7-million people who backed far-left veteran Jean-Luc Melenchon in the first round of the election on Sunday. Melenchon has urged his voters to not give “a single vote” to Le Pen, but stopped short of endorsing Macron, whom he accused of favouring the wealthy.

In a radio interview on Tuesday morning, Le Pen said Melenchon was betraying his supporters by not backing the only candidate who can protect the poor. “Melenchon’s behaviour was a great source of astonishment to me,” Le Pen said. “He was tougher on Macron five years ago,” she added in a reference to the 2017 election. Le Pen called Macron’s plan to raise the retirement age to 65 deeply unfair.

The far-right leader finished 4.7 percentage points behind Macron on Sunday. Melenchon came third. While polls give the president an advantage, Le Pen has already added more than 10 points to her showing last time, making for a much tighter-than-expected contest.

Finance minister Bruno Le Maire, who was speaking on TV almost at the same time, said Le Pen’s economic agenda would increase poverty and deepen social divisions in the country. “Our proposals on purchasing power are more efficient and fairer than those of Marine Le Pen,” he said.

While out campaigning in northern France on Monday, Macron said he might be willing to tweak his pension reform plans. “I am opening the door very clearly,” he said. “Maybe, if there are too many tensions, we have to stop in 2027, and not carry on” with the reform. That would raise the retirement age to 64 rather than 65.

Polls have repeatedly shown that the economy is the number one concern for the French as the war in Ukraine worsens rising costs of energy and food. Macron cast himself as a leader who managed to steer the country throughout the Coronavirus pandemic and the war while Le Pen has surged on a platform that focused on purchasing power instead of immigration, which was historically been her flagship cause.

French business lobby Medef said in a statement that it had weighed up the economic programmes of Macron and Le Pen and had concluded unanimously that the policies of the incumbent president were preferable “to guarantee economic and job growth”.

“Even if it does have some holes, it’s the better placed to prepare France for the challenges of the future by choosing competitiveness and sustainable growth,” Medef said.

“Marine Le Pen’s economic programme would lead the country to fall behind its neighbours and would put it at the margins of the EU. It would damage confidence among economic stakeholders, thus reducing investment and job creation. The very strong and unfinanced increase in public spending would risk putting the country into a dead-end.”

Weeks ago the French president looked likely to win, but his focus on the Ukraine war as rival focused on cost-of-living issues hurt his chances
World
2 months ago