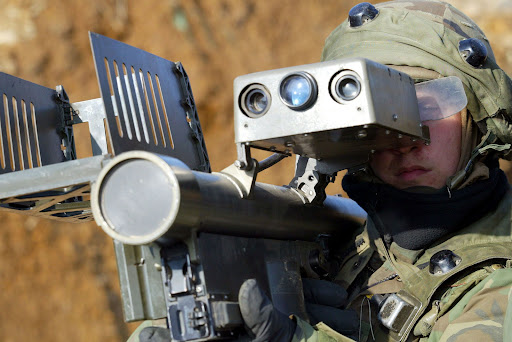 Ukraine’s allies in Europe are moving beyond their usual emphasis on diplomacy and sanctions in response to Russia’s invasion of Ukraine, with a new focus on urgently arming Kyiv as the best chance at changing Vladimir Putin’s decision-making.

After six weeks of a war that sanctions have done little to ease — and no sign that negotiations with Russia will produce any result — some of the bloc’s least likely warriors are calling for more weapons.

On Monday Germany’s foreign minister, Annalena Baerbock — from the traditionally pacifist Green Party — called for sending “more military equipment, above all heavy weapons. “There is no time to make excuses.”

The shift partly comes as European nations accept that sanctions have done little to crimp Russia’s ability to fund its military operations, and several nations continue to resist the toughest actions over fears they would also hit their own economies. Many of the measures introduced by the EU, such as restrictions on technology exports, are designed to impact the Russian economy over time.

In terms of short-term impact, the bloc has few tools left at its disposal other than sanctioning Russia’s oil and gas — and on that member states remain divided. An EU diplomat also noted that the bloc’s assessment of how to inflict pain on the Russian government doesn’t always square with Putin’s own strategic calculations.

“Normally, wars have been won and lost on the battlefields,” Josep Borrell, the EU’s foreign policy chief, told reporters at a meeting of foreign ministers in Luxembourg on Monday. The bloc approved an extra €500m (R7.9bn)  to buy more arms for Ukraine.

After the meeting, Baerbock said the ministers agreed to boost their efforts. “We will jointly as the EU, jointly as friends of the Ukraine, intensify in future the delivery of weapons,” she told reporters.

Ukraine is bracing for a stepped-up assault on eastern Ukraine, with Russian forces currently regrouping to target the Donbas region. Without an influx of heavy weapons, Ukraine’s military will struggle to fend off a Russian advance.

“We now basically stand in front of this equation to decide what is more important: sanctions or weapons,” Jean Asselborn, Luxembourg’s foreign minister,” told reporters on Monday. “My conclusion — and if you had told me this two months ago, I would have said, are you crazy — is that it’s now weapons.”

The new focus on hard power is also driven by a recognition that Europe may be reaching the limits of what it can agree to in terms of additional sanctions on Russia. The EU banned Russian coal last week, but the final deal came only after countries agreed to allow a four-month period for the embargo to kick in.

Foreign ministers from several EU countries pushed for a ban on Russian oil during their meeting on Monday, according to an EU diplomat, but others have been unwilling to take the economic pain from such a step.

The EU is starting to explore ways to limit Russia’s revenue from oil sales, short of a full ban. Those include tariffs or an escrow account to freeze the extra profits Moscow is making from oil price spikes after its invasion of Ukraine. But even such compromises will be difficult to strike, with Hungary insisting that any such decision would need to be taken by EU leaders at a summit.

That leaves Europe focusing on getting weapons to Ukraine, which has asked for a wide range of supplies.

“We need air defence systems, we need aeroplanes, tanks, other armoured vehicles, artillery systems, munitions,” Ukrainian President Volodymyr Zelensky said on Monday in an address to the South Korean parliament. He has also called for the EU and others to embargo Russian oil and gas.

The EU and Nato are beginning to accept that the war in Ukraine could drag on for months and that Kyiv will need a lot more help to continue repelling Russia’s assault. At the same time, there’s no indication that Europe or the US is ready to begin supplying Ukraine with items like fighter jets.

Borrell told EU diplomats the countries must make decisions on weapons deliveries in days and not weeks, and the bloc must do whatever it takes to help Ukraine, according to people familiar with the matter.

There is still some hesitation by governments over what to supply. An EU diplomat noted that countries need some assurances about where the weapons they send will end up, since Kyiv has some unreliable paramilitaries operating. Modern weapons systems also require training, which takes time that Ukraine might not have has it braces for a Russian assault in the country’s east.