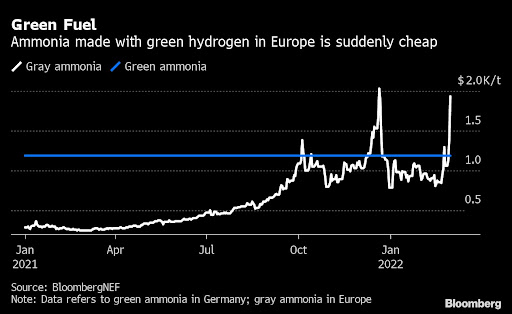 Europe’s push to wean itself off Russian natural gas is sparking billions of dollars in new commitments toward building a market for low-carbon hydrogen.
Image: Bloomberg

Europe’s push to wean itself off Russian natural gas is sparking billions of dollars in new commitments towards building a market for low-carbon hydrogen.

A nearly 450% jump in European gas prices the past year made the green fuel of the future cost-competitive about a decade ahead of schedule, according to Bloomberg. Now, investment funds are joining governments and utilities in ambitious plans to make hydrogen a viable substitute for fossil fuels in manufacturing, transportation and heating.

“It’s kind of a tipping point,” said Phil Caldwell, CEO at Ceres Power Holdings, a UK-based hydrogen technology company. “You’re going to see that capital coming in on a big scale now. There’s no turning back.”

Russia is ostracised on the world stage for invading Ukraine, but some of the harshest critics still need its oil and gas to keep their economies running. Europe is quickening efforts to break that addiction, with Fortescue Metals Group planning a $50bn (R725.5bn) project for the hydrogen supply chain with German energy giant E.On SE; Norway’s Scatec ASA building a $5bn production plant; and investment fund Hy24 earmarking $1.6bn for infrastructure.

The case for hydrogen already was growing, primarily because of its climate benefits, but the war broadened investor interest by highlighting the need for energy security, Fortescue’s billionaire founder, Andrew Forrest, said in an interview.

“It has accelerated money flows,” Forrest said in London. “After the tanks rolled across the border, there’s none of that conscience at work in people’s minds. It is a physical, fiscal necessity.”

About 93% of hydrogen producers, users and investors attending a BNEF roundtable last month said they expected the war to boost development of the green-hydrogen industry. Support for domestic production and imports from trustworthy sources will be key, the participants said.

Green hydrogen has long been more expensive to produce than the traditional kind, which is made from natural gas in a process that releases carbon dioxide into the atmosphere.

That’s starting to change. BNEF analysts found that green hydrogen, made by machines called electrolysers that are powered by the wind and sun, would be cost-competitive today with the fossil fuel-based product.

Previously, that cost parity wasn’t expected until around 2030 through a combination of cheaper electrolysers and huge growth in the deployment of turbines and solar panels, thus making production cheaper.

But surging gas prices shifted the calculus, meaning green hydrogen’s costs don’t need to fall as much to be competitive. Just replacing current hydrogen demand with the green kind in industries like oil refining and fertiliser production could reduce the EU’s gas demand by 12%, according to BNEF.

At the same time, the bloc’s carbon price has nearly doubled in the past year, making the emissions-free gas more attractive.

“The economics are moving in favour of green hydrogen,” said Ivan Pavlovic, executive director at French bank Natixis CIB, which is working on financing for fuel production. “The projects we’re seeing look more bankable from a finance perspective now.”

Costs only go part of the way, though. Gas prices could decline, bringing the economics back to where they were before. However, the war bolstered the political support essential for scaling up the industry.

The EU doubled its goal for green-hydrogen capacity to 80 gigawatts by 2030, compared with less than 1 gigawatt today. The UK just set a target to produce at least 5 gigawatts of hydrogen from electrolysers by 2030, the first time it was so specific.

In the US, the Biden administration said the infrastructure needed to increase natural-gas shipments to Europe will be ready-made for conversion to handle hydrogen.

These projects will take years to be realised and require an enormous increase in renewable sources, but the government support still gives private money the confidence to move in. Hy24 is a joint venture between Ardian SAS, one of Europe’s largest private investment houses with $125bn under management, and FiveT Hydrogen, the world’s first investor to focus exclusively on clean hydrogen.

“It’s a growth topic, it’s an ESG topic, and it’s renewables-at-scale in countries that need it,” Hy24 CEO Pierre-Etienne Franc said. “Because of that, and higher certainty about the future, people are happy to make commitments.”

Danish fund manager Copenhagen Infrastructure Partners K/S initially raised €800m euros (R12.7bn) for its first Energy Transition Fund, with plans to increase that to €2.3bn euros. It recently took a stake in German electrolyser maker Sunfire and agreed to buy 640 megawatts of machines from the company for its own green hydrogen projects.

The London-listed L&G Hydrogen Economy UCITS ETF has exposure to companies with a minimum market capitalisation of $200m, including electrolyser manufacturers and hydrogen producers.

“There is so much money in the market,” Schierenbeck said. “Private-equity firms want to invest now with the first companies that are starting.”

GAVIN NOETH: Just transition not just about gas but entire communities and ...

GAVIN NOETH: Just transition not just about gas but entire communities and ...