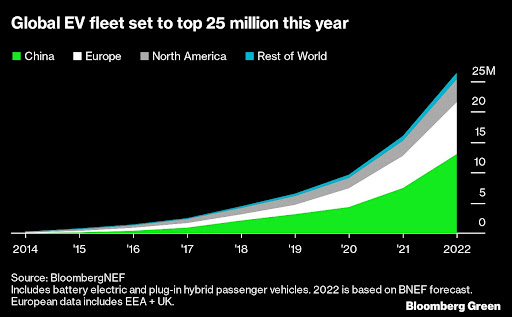 China and Europe are driving most of the adoption, with North America a distant third source of sales. Up next: emerging markets.
Image: Bloomberg

The world is about to pass another important milestone in electric vehicle adoption: 20-million plug-in vehicles on the road globally, come June, according to BNEF estimates. That’s remarkable growth from only 1-million EVs on roads in 2016.

In the second half of 2022, almost a million EVs a month will be added to the global fleet, according to BNEF estimates. That’s about one every three seconds. Vehicles eventually get retired from the fleet due to age, wear-and-tear, crashes and battery degradation. But that’s not a big part of the EV story so far, mostly because the majority of EVs in the global fleet were sold in the past 18 months. By the end of 2022, BNEF is expecting over 26-million plug-in vehicles on the road.

The speed of growth is much faster than many incumbents in the automotive and oil industries were expecting just a few years ago. In BP’s 2016 outlook for example, the company expected a fleet of 71-million plug-in vehicles on the road by 2035. Based on the latest sales data, BNEF now expects that to be achieved by 2025, a full 10 years ahead of schedule.

Taking a look at the geographic breakdown of the vehicles underscores how just a few regions are driving most of the adoption. China accounts for 46% of the total sales to date, followed by Europe at 34%. North America is a distant third at 15%, but fresh policy support should get that EV market moving this year and next. All the remaining countries combined account for just 5% of the global EV fleet.

Most of the world’s plug-in vehicles are fully electric, but there are also 5.3-million plug-in hybrids. Europe accounts for most of them. The plug-in hybrids have helped automakers meet Europe’s increasingly stringent targets for reducing carbon emissions from vehicles. At BNEF, we’re expecting the market to shift away from plug-in hybrids in the coming years, as governments cut subsidies for them, and as automakers roll out their latest fully electric models.

EV adoption in Japan — the largest vehicle market after China, the US and Europe — has been very slow. That should start to change soon as Japanese automakers launch new battery electric models in the popular mini “kei car” segment. Kei is short for keijidōsha, meaning light automobile, and they account for a third of all sales in the country. Nissan and Mitsubishi plan to bring electric kei models to market this year, followed by Honda in 2024, and Toyota subsidiary Daihatsu in 2025. Electric vehicle adoption in neighbouring South Korea has been brisk, with EVs hitting nearly 15% of sales there at the end of 2021, driven by strong model offerings from domestic champions Hyundia and Kia.

Attention will eventually shift to the big emerging auto markets in the world, such as India, Brazil, Mexico and Southeast Asia. EV adoption has barely started in these countries and regions, yet they are key for the growth in global EV adoption to continue once the larger markets start to saturate. There are several encouraging signs. In India’s three-wheeler market, over 50% of sales are already electric. Southeast Asia markets like Vietnam already have relatively high adoption of electric two-wheelers. And parts of Latin America are leading the way on electric buses and are starting to focus on electrifying taxis.

Perhaps most importantly, the models available in China’s EV market show how electric mobility can be very compelling for lower-middle class consumers in emerging markets. The best-selling EV in China so far this year is the Hongguang Mini, which retails for just $4,700 (R69,250).

Models like that, combined with a big push on electric kei cars from Japanese automakers, and more electric motorcycles and scooters, will help the rest of the world make the jump to electric mobility. There are other benefits, too. The Hongguang Mini weighs just 560kg , compared with more than 4,000kg for the recently launched electric GMC Hummer, which has a battery pack almost 20 times the size. With battery raw material costs soaring, scaled-down EVs look much more like the sustainable mobility solution the world needs.

The next few years will bring remarkable progress on EV adoption, but it’s worth keeping in mind just what a huge task it is to convert the world’s vehicle fleet. BNEF estimates that there are 1.2-billion light-duty passenger vehicles on the road globally. At the end of 2022, just over 2% of them will be electric. There’s still a long way to go. But the momentum is building.

DAVID FURLONGER: SA is charged with … not much

DAVID FURLONGER: SA is charged with … not much