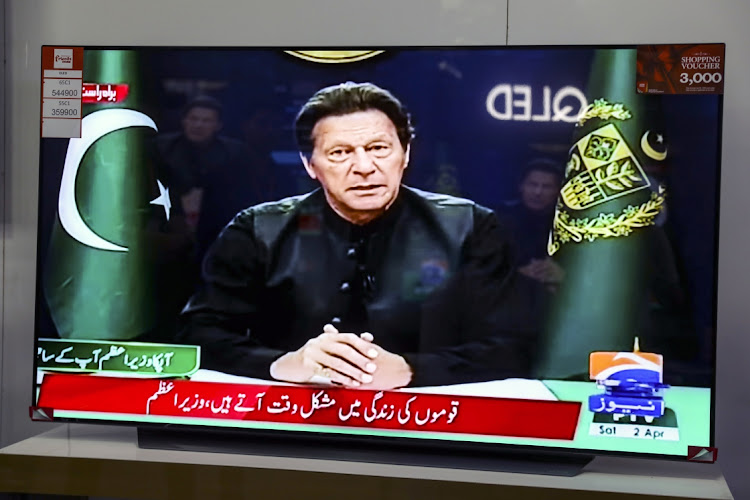 A television broadcasts live footage of Imran Khan, Pakistan's prime minister, at a store in Islamabad on April 5 2022 ahead of the supreme court’s ruling on his disputed call for national elections. Picture: Asad Zaidi/Bloomberg

Prime Minister Imran Khan’s party is on the verge of losing control of Pakistan’s biggest province days after it lost its majority in the federal parliament, raising the stakes ahead of the supreme court’s ruling on his disputed call for national elections.

After losing his majority in the lower house National Assembly last week, the former cricket star’s Tehreek-e-Insaf party faces a rebellion in Punjab province that might make it harder for him to get his ally elected as the chief minister. The developments come as the Supreme Court resumed a review on Thursday on the constitutional validity of the parliamentary ruling on Sunday that cancelled a no-confidence vote against Khan. He swiftly dissolved parliament and announced fresh elections.

The deputy speaker’s ruling to cancel the vote allowed Khan to dissolve the assembly, said Umar Ata Bandial, chief justice of the Supreme Court during the hearing. “Now we need to look at the intention of the act. The ruling is apparently in violation of an article” of the constitution.

It is unclear when the court plans to hand down its order.

If the court strikes down Sunday’s ruling, the National Assembly will be restored and the no-confidence motion carried out. The opposition is likely to still have the numbers to oust Khan in parliament and elect Shehbaz Sharif as the prime minister to lead a coalition government. They too, plan to call elections soon.

Delays could lead to more instability in Pakistan, especially at a time when the country is in talks with the International Monetary Fund for the release of an instalment of its bailout loan. Reflecting the political strife of the past month, the rupee is trading at a record low against the dollar and the nation’s foreign currency reserves fell $2.9bn in the week through March 25. The rupee dropped 1.3% to 188.49/$, poised for its biggest loss in more than 20 months.

Punjab is Pakistan’s most populous province, making it a crucial stage for Khan ahead of elections he controversially called for.

In recent months, Khan appears to have fallen out with the South Asian nation’s powerful army over his handling of foreign policy issues as well as the economy. He clashed with top generals after publicly disagreeing with the army chief over a key promotion, undermining an important relationship that has helped him stay in power.

Pakistan’s military, once a top recipient of US arms, has also sought a more balanced foreign policy after becoming increasingly reliant on China for weapons. Khan has moved closer to Beijing and Moscow, meeting with Vladimir Putin just hours after the Russian leader ordered troops into Ukraine.

Army chief Gen Qamar Javed Bajwa in a speech last week called for better relations with the US and also criticised Russia for invading Ukraine, highlighting the schism with Khan’s administration.

Khan has accused the US of conspiring to topple his government, citing a letter from the country’s envoy in the US after meetings with the officials of the Biden administration, a charge denied by the US.