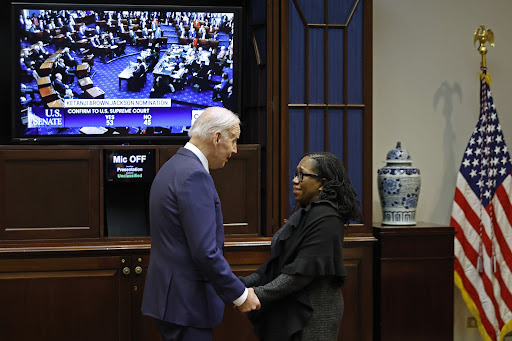 Ketanji Brown Jackson talks to US President Joe Biden in Washington, the US, April 7 2022. Picture: BLOOMBERG

Ketanji Brown Jackson was confirmed to the US Supreme Court on Thursday, making history as the first black woman to ever join its ranks while leaving the ideological balance on the nation’s highest court unchanged.

The 53-47 vote affirming the elevation of the federal judge saw her garner backing of all 50 Senate Democrats and only three Republicans — Susan Collins of Maine, Lisa Murkowski of Alaska and Mitt Romney of Utah.

President Joe Biden watched the vote with Jackson, his first Supreme Court pick, in the Roosevelt Room at the White House. Vice-President Kamala Harris presided over the vote and her husband, Doug Emhoff watched from the gallery.

Jackson, a Harvard Law School graduate and former public defender who the Senate confirmed in 2021 to the powerful US Court of Appeals for the DC Circuit, will join the high court when justice Stephen Breyer retires in June or July. She will be the court’s 116th justice, its sixth woman and the eighth justice who isn’t a white male.

Jackson’s confirmation process further solidified the infusion of partisanship and politics in judicial appointments. Though no Republicans said she wasn’t qualified for the job, she got fewer GOP votes than the nine Sonia Sotomayor got in 2009 and the five Elena Kagan received in 2010.

Many GOP senators, including minority leader Mitch McConnell, said they opposed Jackson because they view her as a potential activist judge.

“Republicans want to uphold the separation of powers the framers left us,” McConnell said. “We want judges to honour their limited role in our Republic: stick to the text, rule impartially and leave policymaking to policymakers.”

Democrats said Jackson is impartial and even-handed, and will bring more diversity to the court.

“She will be the first, and I have no doubt in my mind that she will pave the way for others in the future,” Senate majority leader Chuck Schumer said.

Jackson’s nomination fulfilled a 2020 campaign promise by Biden, who vowed to make his first Supreme Court pick a black woman. The confirmation could give Democrats a needed political boost as they battle to keep control of the House and Senate in this autumn’s elections despite Biden’s slumping approval ratings.

At her confirmation hearings, Jackson faced intense questioning about her record in earlier roles as a federal judge, a public defender and vice-chair of the US sentencing commission. Frequently interrupted, she defended herself amid questions about her past representation of alleged terrorists held at Guantánamo Bay, Cuba, and a cluster of sentences she meted out in child pornography possession cases that some Republicans said were too lenient.

Republicans continued to raise concerns that Jackson is soft on crime during debate on the Senate floor. GOP Senator Josh Hawley of Missouri at one point paused the debate with an unsuccessful attempt to get the full Senate to take up legislation establishing a five-year minimum sentence for anyone convicted of possessing child pornography.

Another Republican senator, Tom Cotton of Arkansas, went so far as to suggest Jackson might have defended the Nazis in court.

“You know, the last Judge Jackson left the Supreme Court to go to Nuremberg and prosecute the case against the Nazis,” Cotton said, referring to former Justice Robert Jackson. “This Judge Jackson might have gone there to defend them.”

Democrats defended her against suggestions that she’s too lenient on criminals, noting she has endorsements from police groups including the Fraternal Order of Police and has family members in law enforcement.

“Far from being soft on crime, very movingly, she described what it is like to have a family member who walks a beat because her brother is a cop and her uncle, a chief of police,” said senator Richard Blumenthal, a Connecticut Democrat.

Jackson, who can stay on the DC Circuit until her swearing-in, won’t be seated for this term’s blockbuster decisions, including potentially overturning the Roe vs Wade abortion-rights decision.

For the next term, Jackson has said she would recuse when the court considers a challenge to Harvard College’s use of race in its admissions decisions. She serves on the university’s board of overseers.

The court is also planning to hear cases in its next term over redistricting and the Voting Rights Act, the reach of the Clean Water Act and free-speech objections to laws barring anti-LGBTQI discrimination.

Confirmation hearing chair dismisses attacks by some conservatives on first black woman nominated to join the US’s top judicial body as baseless and ...
World
3 months ago