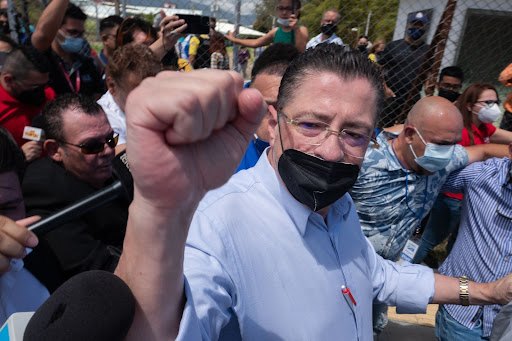 His rival Jose Maria Figueres conceded, and Chaves led with 53% to 47% for Figueres, with 98% of the votes tallied.

Long an oasis of stability in a region plagued by violence, Costa Rica had a choice of president between two investor-friendly candidates, setting it apart from neighbours led by fiery radicals such as El Salvador’s Nayib Bukele and Nicaragua’s Daniel Ortega.

Chaves promised to boost growth with more foreign investment and higher levels of tourism. The US-educated president-elect has pledged to reduce the government’s fiscal deficit and said he favours a close relationship with the International Monetary Fund. The government signed a $1.8bn extended fund facility with the multilateral lender in 2021.

In his victory speech Chaves said he would modernise the state, create jobs and govern with “transparency and austerity”.

Costa Rica’s dollar-denominated bonds traded higher on Monday, with those due in 2045 at 99.8c on the dollar, the highest since February 22. The nation’s bonds have returned 1.4% this year vs an average loss of 9.5% across emerging markets, according to data compiled by JPMorgan Chase.

Citigroup strategists Dirk Willer and Ernesto Revilla wrote in a note that Chaves’s party will probably face governability hurdles in congress and that investors’ focus will now turn to cabinet and central bank appointments.

Costa Rica has long enjoyed some of the best living standards in Latin America, but has more recently suffered from mediocre economic performance and seen its growth rate lag behind peers such as the Dominican Republic and Panama.

Chaves, who earned a PhD in economics from Ohio State University, promised to cut red tape to foster an environment where entrepreneurs can thrive and said he can promote a low interest rate environment to spur investment.

He worked 27 years at the World Bank, becoming country director for Indonesia in 2013. During the campaign, he came under fire over sexual harassment allegations made while he worked at the bank. He denied any wrongdoing, and attributed the accusations to misunderstandings caused by cultural differences.

Chaves served six months as Costa Rica’s finance minister under president Carlos Alvarado before stepping down in May 2020 over what he said were differences with Alvarado on spending cuts. Chaves will be sworn in as president on May 8.

“The best is yet to come,” he said. “We will have more jobs and better jobs, and better public services.”

How Costa Rica’s unpopular candidates present a poser for electorate

Having contributed essentially nothing to climate change, the Rapa Nui are just one of the world’s many indigenous peoples struggling against its ...
News
5 months ago
Next Article