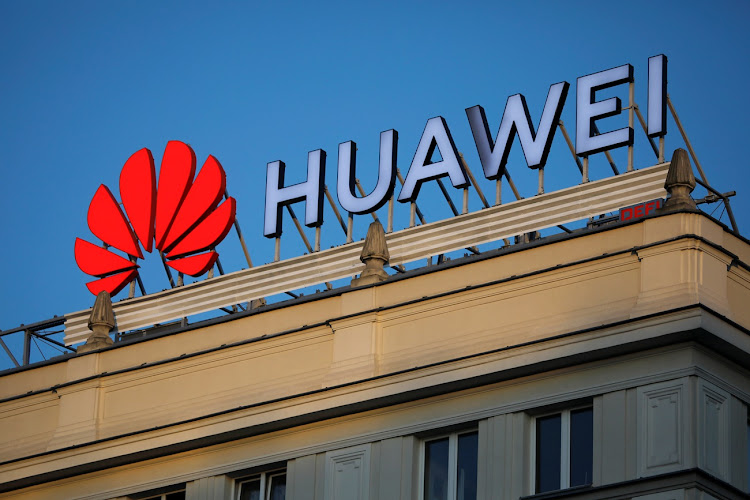 Huawei’s net profit surged 76% in 2021 despite deep revenue declines across its business, reflecting efforts to shave costs and rely on home-grown components to weather the fallout from American sanctions.

The Chinese networking and smartphone giant unveiled its annual results at a briefing presided over by CFO Meng Wanzhou, who met media for the first time since her September release from three years of house arrest in Canada.

The eldest daughter of billionaire founder Ren Zhengfei was arrested and held in Vancouver over fraud allegations. She will now help oversee a company grappling with a series of US technology export and investment restrictions — most imposed by former President Donald Trump — that have severely undermined its business from the UK to India.

Meng sketched out Huawei’s broad strategy for countering the restrictions — hiring top-notch talent and ploughing much of its revenue back into research, both pivotal to helping wean the company off American technology. But she mostly confined herself to outlining the company’s financials. The company aims to hire a staggering 10,000-plus college graduates in 2022, rotating chairperson Guo Ping said at the same event.

“Over the years, our teams have undertaken a lot of pressure,” Meng told reporters. But “our strategy has become clearer: We will continue to invest heavily in talent and R&D.” 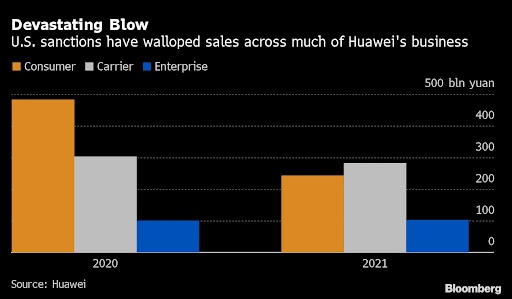 Huawei 's net profit surged 76% in 2021 despite deep revenue declines across its business, reflecting efforts to shave costs and rely on homegrown components to weather the fallout from American sanctions. Picture: BLOOMBERG

Net profit jumped to 113.7bn yuan ($17.8bn) last year, despite a previously reported 29% slide in revenue to 636.8bn yuan. It’s unclear if Huawei included proceeds from the sale to a state-led conglomerate of its Honor arm, which Reuters reported could have been valued at more than $10bn. In 2021, it also sold its x86 server business to a Chinese consortium after the blacklisting made it difficult to secure processors from Intel.

Huawei reported 61bn yuan in additional net income in 2021 from sources it didn’t specify. Sales at its consumer arm, once China’s largest maker of smartphones, halved to just 243.4bn yuan, while carrier revenue slid 7% and the enterprise solutions division eked out 2% growth.

Meng spent most of the past three years in confinement at her Vancouver mansion while battling extradition to the US. She was freed last September after reaching a deferred prosecution agreement with US authorities. The 50-year-old executive received a hero’s welcome after landing in Shenzhen on a chartered jet just a few days before National Day, which marks the Chinese Communist Party’s takeover of the country in 1949.

She will now help executives including rotating chairmen Guo, Eric Xu and Ken Hu steer the tech behemoth her father created 35 years ago, while figuring out how to make enough money to keep its roughly 200,000 employees.

Huawei, once the world’s largest smartphone maker and most advanced telecom networking company, is at the heart of a US campaign to contain China’s economic ascent. After labelling the firm a threat to national security, Washington levelled a series of curbs and sanctions that almost obliterated its consumer business and barred its 5G gear from parts of Europe and Asia. Key overseas suppliers from Qualcomm to Taiwan Semiconductor Manufacturing cut ties in 2020.

Huawei has since embarked on an overhaul of the business to mitigate the fallout. It developed electric vehicle technologies, pledged to add investment in software and made inroads into new markets from solar to mining.

Asked how Huawei hoped to establish its own chipmaking operations to circumvent US bans particularly in semiconductors, Guo said the company will focus both on fundamental breakthroughs as well as squeezing more life out of less advanced technologies to sustain its critical networking business.

“Despite a revenue decline in 2021, our ability to make a profit and generate cash flows is increasing, and we are more capable of dealing with uncertainty,” Meng said in a statement before Monday’s briefing.

Uber to feature New York yellow taxis on its app