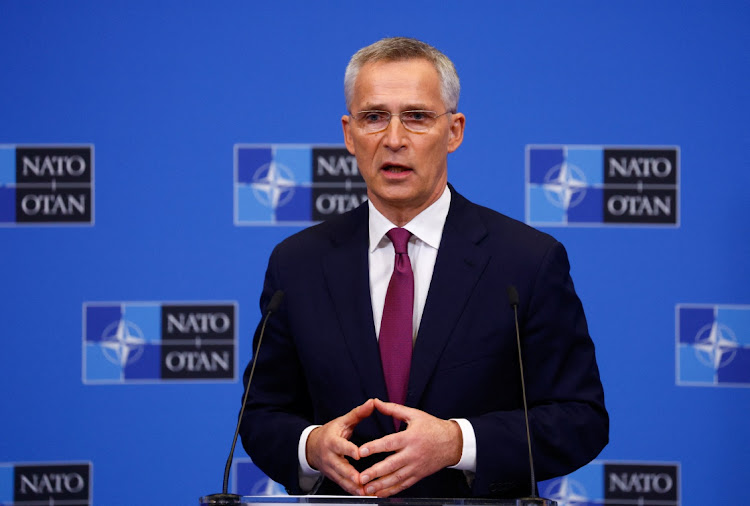 Nato secretary-general Jens Stoltenberg attends a news conference on the eve of a Nato summit, amid Russia’s invasion of Ukraine, in Brussels, Belgium, on March 23 2022. Picture: REUTERS/GONZALO FUENTES

The head of the Nato military alliance said member states will pledge to help Ukraine to cope with any use of chemical weapons and urged Russia to stop “sabre-rattling” over a nuclear attack.

Jens Stoltenberg, secretary-general of the 30-member North Atlantic Treaty Organization, told reporters that he expects leaders meeting in Brussels on Thursday “will agree to provide additional support, including cybersecurity assistance, as well as equipment, to help Ukraine protect against chemical, biological, and radiological and nuclear threats.

“Any use of chemical weapons would totally change the nature of the conflict and it would be a blatant violation of international law and have far-reaching consequences,” Stoltenberg said, adding contamination could spread to Nato countries.

Nato officials are studying different scenarios around Russia’s possible use of chemical agents as weapons of mass destruction, Nato officials said. A so-called false flag event could involve an accident at a chemical plant given the significant amounts of ammonia, chlorine and nitrates in Ukraine that are used in its agricultural industry.

Another scenario considers Russia using a chemical weapon that could involve a highly toxic agent delivered across a wide area, the officials said. These kinds of attacks, however, would allow immediate attribution and it’s unclear whether Russia would want to avoid that, they added.

Germany shares the view that any move by Russia to use chemical or biological weapons would be a grave violation of international law and would have very serious consequences, a senior government official said at a briefing in Berlin on Wednesday. The official, who asked not to be identified in line with briefing rules, didn’t elaborate.

With the summit also due to rethink Nato’s long-term military posture, especially on its eastern flank, Stoltenberg warned Russia against making threats that could escalate the war in Ukraine.

“Russia must stop its nuclear sabre-rattling,” Stoltenberg said. “This is dangerous and it is irresponsible. Nato is there to protect and defend all allies and we convey a very clear message to Russia that a nuclear war cannot be won and should never be fought.”

Unlike previous cases calling for intervention, they have not put in place a no-fly zone
Opinion
4 months ago