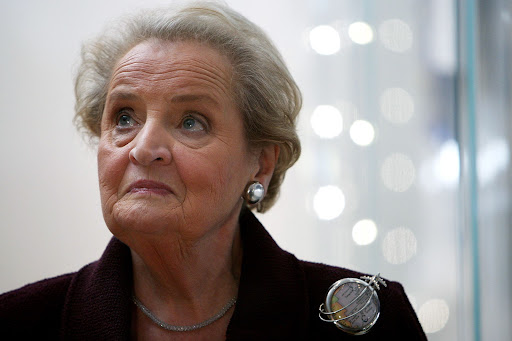 Madeleine Albright, the first woman to serve as US secretary of state and a grande dame of foreign policy for the Democratic Party who wrote books, served on think-tank boards and warned of the risk of fascism in the Donald Trump era, has died at the age of 84.

She died of cancer on Wednesday, according to her family.

Appointed by President Bill Clinton in 1996, halfway through his two-term presidency, Albright became the highest-ranking woman in the US government at the time. As America’s top diplomat, she called for the use of force as the conflict in Kosovo sank into ethnic cleansing. That was consistent with the hard line she pushed during the Bosnian War, when she was Clinton’s ambassador to the UN.

She later described the Rwandan genocide of 1994 and the failure to achieve a Mideast peace accord as among her biggest regrets.

“Madeleine’s courage and toughness helped bring peace to the Balkans and paved the way for progress in some of the most unstable corners of the world,” then president Barack Obama said in awarding Albright the Presidential Medal of Freedom, the nation’s highest civilian honour, in 2012.

Responding to news of her death, state department spokesperson Ned Price told reporters: “The impact that she has had on this building is felt every single day. She was a trailblazer as the first female secretary of state and quite literally opened doors for a large element of our workforce.”

In a statement, Clinton called Albright “an extraordinary human being” and “a passionate force for freedom, democracy and human rights”.

At 1.5m tall, Albright was famous for well-tailored suits adorned with pins or brooches, ranging from balloons to carnivorous animals and chosen to reflect a mood or an opinion. After learning that the Russians had bugged a conference room near her office at the state department, for example, she wore a pin shaped like a huge bug.

Albright’s stature and style belied a commanding negotiating skill. When Yasser Arafat walked out of Paris talks in 2000, Albright told guards at the US ambassador’s residence: “Shut the gates!” As UN ambassador, she responded to Cuba’s 1996 downing of two unarmed Cessna aircraft: “This is cowardice.”

In an opinion column published on February 23 in the New York Times, just before Russian forces invaded Ukraine, Albright took direct aim at Russian President Vladimir Putin. She disclosed that while flying back to Washington after her first meeting with Putin in 2000, she recorded her observations of him: “Putin is small and pale, so cold as to be almost reptilian.

“Instead of paving Russia’s path to greatness,” she wrote in the column, “invading Ukraine would ensure Mr Putin’s infamy by leaving his country diplomatically isolated, economically crippled and strategically vulnerable in the face of a stronger, more united Western alliance.”

In an interview, Leon Panetta, a White House chief of staff under Clinton, recalled Albright as “a Cold War warrior” who had been “raised to understand what communism was about and what the threat from Russia was all about”. Thomas Pickering, who served under Albright as undersecretary for political affairs, said in an interview: “She had little love, I would say, for Russia, and that scepticism and indeed suspicion about Russia has proved to be more true than I think any of us had reason to believe when I worked for her.”

An emigrant who fled Czechoslovakia at the dawn of World War 2 only to discover her own Jewish heritage more than a half-century later, Albright witnessed first-hand the displacement of people deemed undesirable.

“In the end, no one who lived through the years of 1937 to 1948 was a stranger to profound sadness,” Albright wrote in Prague Winter, her personal account of the period. “Millions of innocents did not survive, and their deaths must never be forgotten.”

Albright was born Marie Jana Korbel on May 15, 1937, in Prague, one of three children of Josef Korbel, a diplomat, and the former Anna Spieglova. (The family statement on her death gave her surname at birth as Korbelova.) When the German army arrived in 1939, the family went into exile in London.

At war’s end, they returned to Prague, relocating several months later to Belgrade where her father served as ambassador. At the age of 10, Albright was sent to boarding school in Switzerland.

When the Communist Party took control in Czechoslovakia in 1948, her father accepted a post on a UN commission on Kashmir. The Korbels stayed in New York. By then, Albright spoke four languages: Czech, Serbo-Croatian, English and French.

Gaining political asylum in 1949, they moved to Denver in the US, where her father became a professor at the University of Denver. She met her future husband, Joseph Medill Patterson Albright, during a summer job at the Denver Post. They married in 1959, the year she earned a bachelor’s degree in political science from Wellesley College in Massachusetts. They had three daughters — Anne, Alice and Katharine — before the marriage ended in divorce.

A Catholic who became an Episcopalian in marriage, Albright learned of her Jewish ancestry — along with the deaths of more than a dozen relatives, including three grandparents in the Holocaust — in 1997 at age 59.

In her 2003 autobiography, Madam Secretary, she said of her parents: “My guess is that they associated our heritage with suffering and wanted to protect us. They had come to America to start a new life.”

Albright obtained a PhD in public law and government from Columbia University where she studied under Zbigniew Brzezinski, former president Jimmy Carter’s national security adviser. She also earned a certificate in Russian studies.

When Republicans came to power, she taught at Georgetown University and advised Democrats on foreign policy, including presidential candidates Walter Mondale and Michael Dukakis. In 1989, she became president of the public policy think-tank Center for National Policy.

With Clinton’s victory in 1992, she became US permanent representative to the UN. In 1995, when Bosnian Serbs killed as many as 8,000 Bosnian Muslims in Srebrenica, Albright presented evidence of mass graves to the Security Council. With the lessons of Rwanda fresh in mind, she argued for the use of force. After the shelling of a Sarajevo market in August, the largest Nato mission yet got under way, leading to the Dayton Accords that ended the war.

When Warren Christopher, Clinton’s first secretary of state, announced his plan to return to the private sector, Albright was nominated as his successor. The US Senate confirmed her appointment unanimously.

Albright sought the use of force again in Kosovo, where in 1998 a civil war had ensued. Dubbed “Madeleine’s War,” Nato engaged in combat for the second time in its history, launching air strikes in March 1999 without the approval of the Security Council.

“Madeleine Albright is somebody who grew up learning the lessons of Munich, the danger of appeasing dictators, and she feels we need this more assertive foreign policy not to back down in the face of people like Milosevic,” historian Walter Isaacson told CNN in a May 1999 interview. By June, Slobodan Milosevic’s troops began to withdraw from Kosovo.

Her efforts toward an Israel-Palestinian peace were not as successful. “People ask about my greatest disappointment as secretary. This was it,” she said in her memoir.

Albright also supported the expansion of Nato and pressured Iraq to end its blockade of UN weapons inspectors. When Iraq did not comply, the US and Britain launched a series of air strikes known as Operation Desert Fox.

In October 2000, she became the highest-ranking US representative to make an official visit to North Korea, meeting President Kim Jong Il. “I am sad to say that the Bush administration didn’t pick up the hand of cards that we left on the table there,” Albright said in 2013.

After her government career, Albright returned to Georgetown as a professor. In 2005, she founded emerging markets investment adviser Albright Capital Management within her Albright Group consultancy. She combined the firm with Stonebridge International in 2009 to form the Washington-based Albright Stonebridge Group, a global business strategy firm.

In addition to her autobiography and Prague Winter, Albright wrote best-selling books, including 2009’s Read My Pins: Stories From a Diplomat’s Jewel Box.

Even into her 80s, Albright’s defence of the ideals of democracy remained strong. The ascendency of authoritarian leaders was “a more serious threat now than at any time since the end of World War 2,” she wrote in a 2018 essay in the Times that coincided with the publication of her book Fascism: A Warning. She added: “The possibility that fascism will be accorded a fresh chance to strut around the world stage is enhanced by the volatile presidency of Donald Trump.”

She led the nongovernmental organisation National Democratic Institute for International Affairs and the Pew Global Attitudes Project. She also served on the Pentagon’s Defense Policy Board and the boards of the Aspen Institute, Center for American Progress and the Council on Foreign Relations.

Albright never lost sight of the way her career broke through glass ceilings and made a point of promoting the careers of women throughout her professional life. In fact, she made famous a mantra: “There’s a special place in hell for women who don’t help each other.”

Madeleine Albright, first female US secretary of state, dies at 84

ISMAIL LAGARDIEN: War drums around Ukraine and the US empire by invitation

Madeleine Albright, first female US secretary of state, dies at 84

ISMAIL LAGARDIEN: War drums around Ukraine and the US empire by invitation