Hong Kong’s closed borders are in contrast to Asian countries including Singapore, Malaysia, Thailand and Vietnam, which are taking steps to allow vaccinated travellers to enter freely 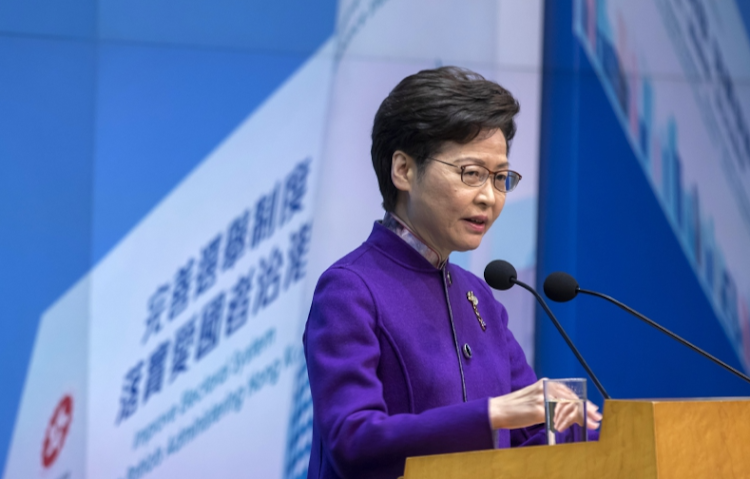 Hong Kong’s leader, Carrie Lam, said she was hopeful the international financial hub could lower barriers with the outside world after the current Covid-19 outbreak waned.

Speaking at the same time as Singapore’s Prime Minister Lee Hsien Loong announced the lifting of most restrictions for vaccinated visitors to the rival financial centre, Lam said on Thursday that she remained “very optimistic” Hong Kong can resume talks to reopen the border with mainland China, as well as “open up to the rest of the world” once “this wave subsides”.

Hong Kong’s government has shifted away from its tough Covid-19-zero stance after being overwhelmed by the rapid spread of the Omicron variant. Hotel quarantine for arrivals will be halved to seven days from next week, while flight bans on some countries will be lifted. Yet many business groups say the government isn’t going far enough. Lam said on Wednesday that officials were looking at ways to resolve flight and hotel room shortages under existing rules.

Speaking at a daily media conference on Thursday, the Hong Kong CEO did not provide further details on how the Chinese territory would open up, referring instead to previous statements.

Hong Kong’s continued isolation and social-distancing rules have led to an exodus of residents as well as increasing economic hardship. A net 144,000 people have left the city in 2022, almost four times the number for the whole of 2021, according to official data and Bloomberg Intelligence calculations. The economy is struggling, with analysts steadily downgrading their growth forecasts for 2022.

Before the pandemic, Hong Kong was one of the most-visited destinations in the world. More than 65-million tourists came to the city in 2018. In 2021, it was “close to zero”, according to the city’s tourism board.

Hong Kong’s closed borders are in contrast to a growing number of countries in Asia, such as Singapore, Malaysia, Thailand and Vietnam, which are taking steps to allow vaccinated travellers to enter freely. Senior officials in Singapore have said the country is looking to restore passenger volume at Changi Airport to at least 50% of pre-pandemic levels by later in 2022, compared to 18.2% currently.

Singapore also announced the lifting of a requirement to wear masks outdoors. In Hong Kong, it’s mandatory to wear a mask, even when doing exercise. Violators face a fine of HK$5,000 ($640).

When asked whether Hong Kong would follow Singapore’s easing measures, Lam said there was no one-size-fits-all approach.

“It’s not meaningful to ask us to choose, whether you’re going for route A or route B,” Lam said. “We’ll have to adjust and do whatever is in the best interest of Hong Kong.”

City has lost several finance events to Singapore, its main regional competitor, which has lifted all quarantine requirements
News
4 months ago

Hong Kong to relook at Covid-19 policies as frustration grows

Despite Lam giving the strongest indication yet that changes may be coming, they would still have to be acceptable in the eyes of Beijing
News
5 months ago
Next Article