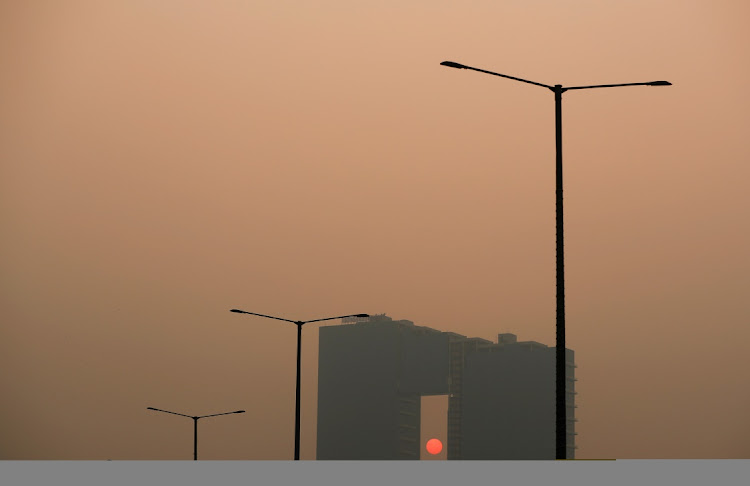 An office complex building is seen shrouded in smog in Noida on the outskirts of New Delhi, India, November 15 2021. Picture: REUTERS/ADNAN ABIDI

Hundreds of millions of people around the world are breathing dirty air that far exceeds health guidelines, and climate change is making pollution worse, according to a new report that analysed real-time air quality data from tens of thousands of monitoring stations.

Those sensors measured levels of PM2.5, particulate matter 2.5 micrometers and smaller in length that is found in vehicle exhaust, power plant emissions, desert dust storms and smoke from cooking stoves and wildfires. Scientists have linked exposure to PM2.5 with heart and lung disease and 7-million premature deaths each year.

In September 2021, the World Health Organization (WHO) issued guidelines that cut acceptable annual exposure to PM2.5 in half, to 5 micrograms per cubic metre of air. No country achieved that strict standard in 2021, according to the report released Tuesday by IQAir, a Swiss company that makes air quality monitors and air purification technologies.

“It will be extremely difficult to achieve the WHO guideline,” said Susan Anenberg, an associate professor at George Washington University who studies the link between the health effects of air pollution and climate change. She was not involved in the preparation of the air quality report.

That challenge was illustrated by the data IQAir collected last year from government air monitoring stations and those operated by private organisations and individuals in 6,475 cities in 117 countries. Only 222 cities met the WHO target, and exposure in 93 cities was 10 times the guideline.

The cleanest air was found in the South Pacific island nation of New Caledonia (3.8), while Finland had the lowest PM2.5 concentrations among developed nations (5.5).

“Our No 2 most polluted country in 2021 is Chad, and the previous year this data wasn’t even available from there,” she said. “That shows that we definitely need to do more in terms of the information gap for air quality in these underrepresented areas that do appear to have a high level of air pollution.”

Those equity issues are being worsened by climate change, said Anenberg. “Climate change is making it harder to even attain our current PM2.5 standards,” she said. “As time goes on, climate change is contributing to larger wildfires, more smoke and more arid conditions in some locations, which entrains dust in the air.”

But efforts to reduce greenhouse gas emissions by replacing fossil fuel vehicles and power plants will also improve air quality. The report noted that while in 2021 Vietnam’s PM2.5 concentration was 24.7, it also has built Southeast Asia’s largest solar infrastructure and is tapping offshore wind energy.