The outliers are commodity producers which have rallied in the past month thanks to the surge in energy prices, with Angola and SA topping the list of winners 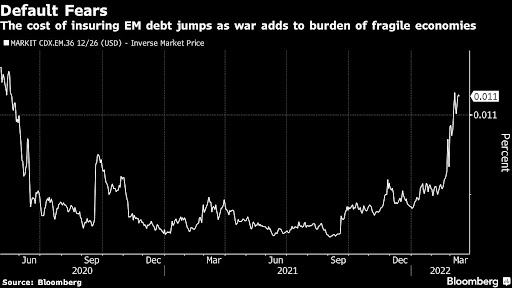 Debt markets in some of the world’s most vulnerable nations are flashing warning signals as Russia’s invasion of Ukraine heaps extra stress on fragile economies. Graphic: BLOOMBERG

Debt markets in some of the world’s most vulnerable nations are flashing warning signals as Russia’s invasion of Ukraine heaps extra stress on fragile economies.

Worries about whether Russia would deliver on its interest payments this month are leading investors to consider who else is at risk of failing to pay. That’s pushed up the cost of insuring against default in emerging-market nations to the highest since the pandemic turmoil of 2020.

Many investors have not been waiting around to find out. Funds have dumped bonds from developing countries this year, with outflows reaching $14.3bn as of March 16, according to Bank of America, citing EPFR Global data.

“In my long research history, contagion has been one of the recurring themes,” said Carmen Reinhart, the World Bank’s chief economist. “We’ve got to keep our ear to the ground, because there are a lot of unknowns.”

The amount of dollar-denominated corporate and sovereign bonds now trading at distressed levels — considered to be 1000 basis points above US Treasuries — has already surpassed $500bn. That includes a growing pool of 14 countries, dominated by those that were already struggling to recover from the Covid-19 pandemic.

Added to the list since the war in Ukraine is Russia itself and neighbour Belarus, since both have been battered by economic sanctions.

The first big question for investors is whether Russia, cut off from international payments and facing a deep recession, can avoid default. Some holders of Russia’s two Eurobonds with coupons due in March 2022 said they received payment in dollars, a relief to investors who feared the nation would resort to settling the debt in roubles. Still, Russian credit swaps on March 18 implied a 48% chance of default within a year.

In Belarus, which Russian troops used as a staging post, a default is also “increasingly likely” for Moody’s, which cut its rating this month by four levels to Ca, its second-lowest grade. That led the country’s debt to overtake Lebanon as the world’s most distressed, with bonds quoted at less than seven cents on the dollar.

Other ex-Soviet republics have been ensnared, given their economic and trade links to Russia. Tajikistan, where remittances from Russia could amount to a quarter of the economy, has handed bondholders a 26% loss since February 21, when a market sell-off started on reports of Russian troop movements. Georgia’s dollar bonds have also seen double-digit losses.

“Countries that depend a lot on Russian remittances will suffer given the weakness of the rouble and potential loss of employment by diasporas in Russia,” said Carlos de Sosa, an emerging-markets strategist and portfolio manager at Vontobel Asset Management in Zurich.

Then there’s countries outside the ex-Soviet bloc that rely on Russia and Ukraine for fuel and food imports. With those supplies drying up or blocked due to sanctions, Pakistan’s debt has fallen into the distressed category, handing investors a 20% loss. Sri Lanka’s bonds, distressed before the war, have sunk to below 50 cents on default fears.

Pakistan is rated at single B, five levels below investment grade, while Sri Lanka is two grades worse at CCC. Both countries are forecast to see inflation spike to hit around 10% this year, with the war sending the cost of oil soaring above $100 a barrel and wheat futures to a record.

“Single B is vulnerable — they are weak fundamentally so people would sell them first when they feel fear,” said Carl Wong, head of fixed income at Avenue Asset Management in Hong Kong. The Federal Reserve, which kicked off a US rate hiking cycle Wednesday, is also causing “a valuation reset” in emerging-market debt, he said.

The countries with potentially the most still to lose are those that benefit from Russian and Ukrainian visitors as well as goods. That could be a longer term problem facing the likes of Egypt and Turkey, whose biggest trade partners include Russia.

While not at distressed levels, Turkey’s local bonds had the worst loss among emerging markets since February 21 and the lira has slid around 10% this year, more than the Ukrainian currency. Its current-account deficit is at a five-year high, and credit swaps protecting against default are the most costly since the global financial crisis.

“Turkey is set to bear the biggest impact from third countries for the war,” said Tim Ash, an emerging-markets strategist at BlueBay Asset Management in London. “Higher energy and food prices and the loss in tourism revenues will make already bad balance of payments and inflation problems much worse and in fact unsustainable. It is indeed hard to see Turkey avoiding a balance of payments crisis now without outside help.”

For Egypt, around 6.6% of its exports go to Ukraine and Russia, while it receives 40% of its tourists from the two countries. That will make it among the most affected, according to Standard Bank, Africa’s largest lender by assets. The crisis will also aggravate Egypt’s vulnerability to foreigners selling bonds, Fitch said.

The country is already in talks with the IMF on possible support that could include a loan, according to people familiar with the matter. The risk premium on Egypt’s debt hit a record 1040 basis points this month, according to a JPMorgan Chase index.

It’s not all bad news for emerging-market debt investors. The bonds of commodity producers have rallied in the past month thanks to the surge in energy prices, with Angola and SA topping the list of winners. The debt of junk-rated Middle Eastern oil producers Oman and Bahrain followed.

Latin America has fewer direct links to Russia and Eastern Europe, and in some ways also stands to benefit from the surging commodity and food prices spurred by the crisis.

Still, a big hit to global economic growth could exacerbate hardships already felt in the region, which suffered a series of government defaults during the pandemic. While bigger economies such as Argentina were already in trouble before the virus, tourism-dependent nations such as Belize stood little chance of meeting debt obligations.

“It is going to be very difficult for some emerging markets,” said Charles Robertson, global chief economist at Renaissance Capital. “Overall, this is bad for Asia, good for Latin America and good for oil exporters within Africa and the Middle East, and unsurprisingly bad for tourism destinations, oil and food importers.”