Finding a valid replacement currency is going to be extremely challenging, say funds 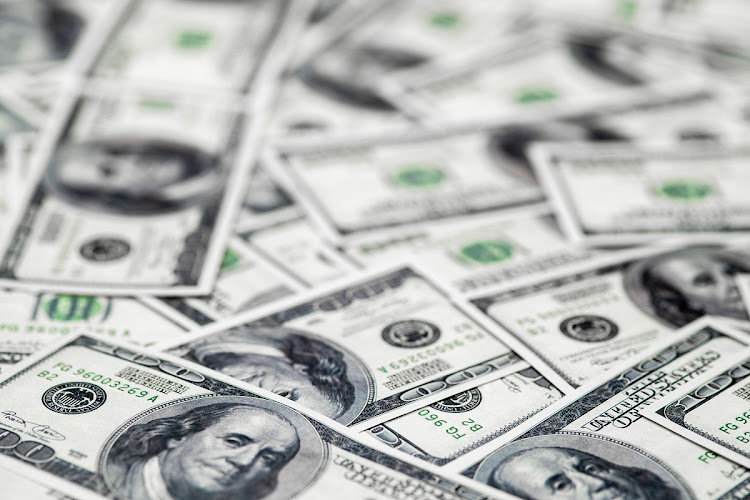 Dethroning the dollar is easier said than done.

That’s the conclusion of investors after Washington’s freeze of Russia’s dollar holdings created fresh impetus among central bankers to rethink the security of access to foreign-exchange reserves. The move fuelled speculation that countries such as China could redouble efforts to unshackle itself from greenback-denominated financial systems and look for alternatives.

While Goldman Sachs Group and Credit Suisse Group have flagged threats to the dollar’s supremacy, finding a valid replacement is going to be extremely challenging, according to funds from Brandywine Global Investment Management to JPMorgan Asset Management. The size and strength of the world’s largest economy is unparalleled, treasuries are still one of the safest ways to store money and the dollar remains a pre-eminent beneficiary of haven flows.

There are simply “no other options at this stage in the game” for currency alternatives to the greenback, said Mark Mobius, a four-decade markets veteran and founder of Mobius Capital Partners. “The dollar is still strong and will probably get stronger if tensions continue to escalate.”

Despite warnings of the dollar’s demise after the 2008 financial crisis, the currency soared when the Federal Reserve adopted an even more globalised role in helping to rescue the world’s financial system. Nearly 90% of trades across the $6.6-trillion-a-day foreign-exchange market still involve the greenback, Bank for International Settlements data show.

The US currency also makes up about 60% of central bank foreign-exchange reserves in spite of efforts to steadily reduce dollar holdings, according to IMF data. Its closest rival, the euro, makes up about 20% of stockpiles. 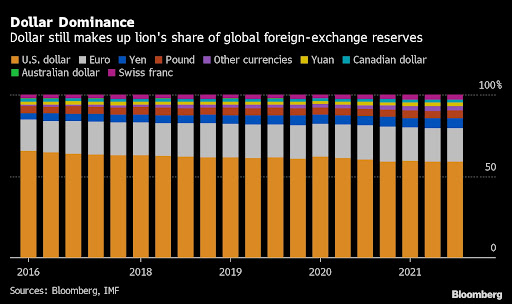 A gauge of the dollar rose 0.2% on Monday, after its first weekly loss in a month.

“You can buy yen, euro or Aussie to diversify but I don’t think they can truly replace the dollar as a reserve,” said Kerry Craig, strategist at JPMorgan Asset Management in Melbourne. “The US remains a dominant power on the global economic stage.”

While the Central Bank of Russia had made inroads in reducing its dollar holdings in favour of alternatives such as gold, recent events show that its efforts may have been in vain, according to Agnes Belaisch, chief European strategist at Baring Investment Services in London.

“Holding nondollar reserves means reliance on counterparties to exchange them against a means of payment,” said Belaisch, whose firm oversees $391bn. “One cannot pay with gold bullion, like one cannot pay at scale with bitcoins. At the start and the end of the chain are dollars.”

That’s not stopping attempts to create challengers to the dollar, with China’s efforts to internationalise the yuan gaining greater attention.

At a Senate Banking Committee hearing this month, Fed Chair Jerome Powell said the war in Ukraine may accelerate Beijing’s efforts to develop alternatives to dollar-dominated international payments infrastructure. Goldman Sachs sees the yuan overtaking the yen and pound to become the world’s third-largest reserve currency by 2030, and Morgan Stanley sees the Chinese currency accounting for up to 10% of global forex assets in the coming decade.

The US decision to weaponise the greenback is accelerating the shift to alternatives such as the yuan, said Benjamin Jones, director of macro research at Invesco, which oversees $1.5-trillion. While the Chinese currency may not overtake the dollar, it could become “the other reserve asset that will work side by side through time”, he said.

Others are unconvinced. Allowing a currency to trade freely is essential for global status and Beijing’s influence over the yuan is seen as an obstacle. China’s emerging-market status is also proving to be a hindrance, as the world’s second-largest economy trails the West in developed financial infrastructure.

The yuan’s share of payments over the Swift global system stands at just 3%, compared with 40% for the dollar and 37% for the euro.

Even news that Saudi Arabia was considering pricing some sales of oil to China in yuan has failed to impress investors.

“China has the economic power to match the old hegemonic power of the US, however it has yet to build the infrastructure to become a financial powerhouse,” said Anders Faergemann, senior portfolio manager for global fixed income at PineBridge Investments. “The renminbi still feels like an afterthought in financial markets” for now, he said.

That’s a sentiment shared by Steven Barrow at Standard Bank in London.

“The problem in China’s case is that the very capital controls that help insulate the currency and the financial system from the vagaries of Fed policy and dollar volatility, are the same ones that prevent the renminbi becoming a serious rival to the dollar,” said Barrow, who is head of currency strategy.

The yuan’s share of global foreign-exchange reserves is at about 2.7%, trailing the yen and sterling.

Other dollar alternatives also have drawbacks.

The euro is the most widely held currency in reserves after the greenback, but its reputation remains scarred from its near-death experience during the eurozone crisis. Gold, the global reserve asset for much of the 20th century, is impractical to move swiftly in a world where money changes hands at the speed of light.

Cryptocurrencies, free of fiat shackles, are too new and volatile to claim global status.

This leaves investors with no truly viable alternative to the dollar, said Jack McIntyre, a portfolio manager at Philadelphia-based Brandywine.

“Can I think of any country that matches the US’s economy, military might and its deep markets right now? No, I can’t,” he said. “We’re not at that point where the dollar can be challenged.”

Bloomberg News. More stories this are available on bloomberg.com

The outliers are commodity producers which have rallied in the past month thanks to the surge in energy prices, with Angola and SA topping the list ...
News
4 months ago

Just as the global economy was recovering from the pandemic, the Ukraine war has stoked inflation and rattled growth assumptions. The terms ...
Features
4 months ago
Next Article