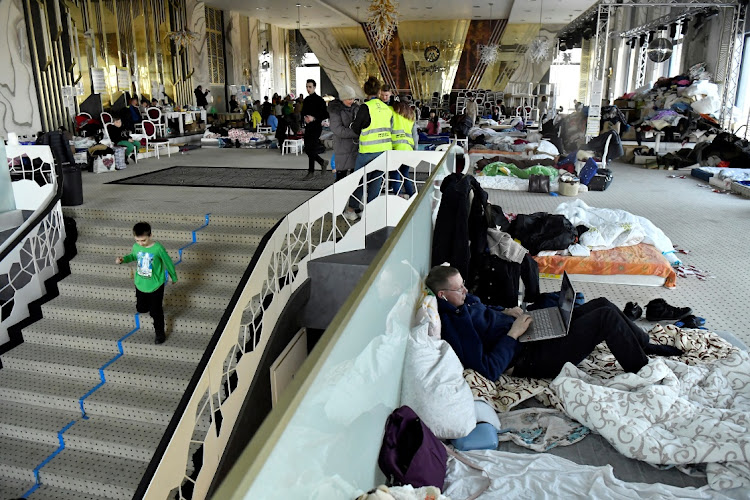 Russia’s increasingly brutal attacks on Ukraine has driven 10-million people — nearly a quarter of the population — from their homes, according to the UN, with growing numbers expected to head to Western Europe.

While most of the displaced people have stayed in Ukraine, about 3.4-million — mainly women, children and elderly people — have sought refugee in other countries, including more than 2-million people in Poland, according to UN data.

Russia’s invasion of Ukraine is approaching its one-month mark and attacks on civilian targets are showing no signs of abating, raising the risks that more people will seek to flee. The besieged southern city of Mariupol has been under heavy bombardment, and Ukraine has accused Russian forces of blocking humanitarian aid.

As the war grinds on, more people are likely to move on from temporary shelter near the border. Most of the 500,000 people who crossed into Romania have left, with just about 80,000 still in the country.

Germany is now bracing for as many as 1-million refugees — roughly triple its previous expectation of 340,000, according to a report by Bild newspaper. As of Monday, more than 225,000 Ukrainian refugees had arrived in Germany, the interior ministry said.

If the number of people approaches 1-million in Germany, it would be reminiscent of the refugee crisis in 2015 — sparked by civil war in Syria, in which Russia provided military support for the government. But there would be decisive differences.

Public support for Ukraine is widespread in Europe, facilitated by sympathy over the attacks and geographical and cultural proximity. Countries such as Hungary and Poland, which rejected the mainly Muslim refugees from Syria, have opened their doors to their Ukrainian neighbours.

The reaction blunts any potential for Russian President Vladimir Putin to use refugees as a weapon. After the political upheaval caused by the Syrian crisis, the Kremlin’s allies have played with the issue.

In 2021, Germany accused Belarusian President Alexander Lukashenko of using migrants to retaliate against EU sanctions by channelling people from Iraq, Syria, Yemen, Iran and Afghanistan to its border with Poland and on to Germany.

Rather than fearing the influx of Ukrainian refugees, there is concern about their wellbeing and protection. Hundreds of volunteers help arrange food and housing for the thousands of people arriving from Ukraine on a daily basis in cities such as Berlin, Budapest, Warsaw and Bucharest.

In Berlin’s former Tegel airport, as many as 3,000 people from Ukraine can stay for up to three nights and a registration centre has been set up to process asylum applications for 10,000 people a day. Once registered, they will be distributed across Germany to spread the burden.

“No-one should abuse the suffering of the people who fled Putin’s bombing raids,” she said on Twitter. “Anyone who tries to take advantage of the plight of the refugees should know that we will react with all the power of the law.”

Bloomberg  News. More stories this are available on bloomberg.com

Knowing the Kyiv embassy staff has fled, consulates demand that applications are filed in the besieged capital
Opinion
5 months ago