Policymakers led by chair Jerome Powell voted 8-1 to lift key rate to a target range of 0.25% to 0.5% amid surging inflation 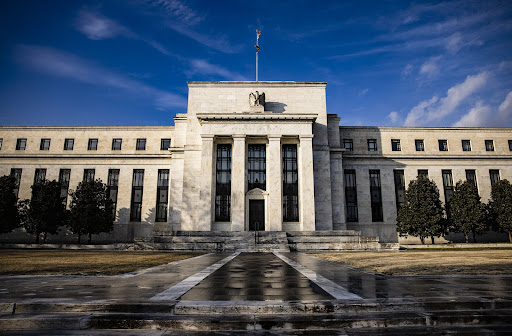 The Federal Reserve building in Washington, DC, the US. Picture: BLOOMBERG

The Federal Reserve raised interest rates by a quarter percentage point and signalled six more such hikes in 2022, launching a campaign to tackle the fastest inflation in four decades even as risks to economic growth mount.

Policymakers led by chair Jerome Powell voted 8-1 to lift their key rate to a target range of 0.25% to 0.5%, the first increase since 2018, after two years of holding borrowing costs near zero to cushion the economy from the pandemic. St Louis Fed President James Bullard dissented in favour of a half-point hike, the first vote against a decision since September 2020.

The hike is likely the first of several to come this year, as the Fed said it “anticipates that ongoing increases in the target range will be appropriate,” and Powell has pledged to be “nimble”.

In the Fed’s so-called dot plot, officials’ median projection was for the benchmark rate to end 2022 at about 1.9% — in line with traders’ bets but higher than previously anticipated — and then rise to about 2.8% in 2023. They estimated a 2.8% rate in 2024, the final year of the forecasts, which are subject to even more uncertainty than usual given Russia’s invasion of Ukraine and new Covid-19 lockdowns in China are buffeting the global economy.

“The invasion of Ukraine by Russia is causing tremendous human and economic hardship,” the federal open market committee said in a statement on Wednesday after a two-day meeting in Washington, the first held in person — rather than via videoconference — since the pandemic began.

“The implications for the US economy are highly uncertain, but in the near term the invasion and related events are likely to create additional upward pressure on inflation and weigh on economic activity.”

The Fed said it would begin allowing its $8.9-trillion balance sheet to shrink at a “coming meeting” without elaborating. The purchases of Treasuries and mortgage-backed securities, which concluded this month, were intended to provide support to the economy during the Covid-19 crisis and shrinking the balance sheet accelerates the removal of that aid.

Fed chair Jerome Powell, speaking after the end of the latest two-day policy meeting, said the economy is strong and that officials will raise rates more aggressively at future meetings if needed to control inflation.

“The way we’re thinking about this is that every meeting is a live meeting,” Powell said in a news conference. “We’re going to be looking at evolving conditions, and if we do conclude that it would be appropriate to move more quickly to remove accommodation, then we’ll do so.”

Powell said the US economy is strong and should “flourish” even in an environment where borrowing costs are rising and stimulus is being removed. “It’s clearly time to raise interest rates and begin the balance sheet shrinkage,” he said.

The Fed faces the arduous task of securing a soft landing for the world’s largest economy for the first time since the early 1990s. Tighten too slowly and it risks allowing inflation to run out of control, requiring even tougher action. Shift too quickly and the central bank could roil markets and tip the economy into recession.

Complicating the job: Russia’s invasion of Ukraine has sent the cost of fuel, food and metals racing even higher, raising fears of 1970s-style stagflation by posing threats to prices, growth and financial-market stability.

In new economic projections, Fed officials said they see inflation significantly higher than previously forecast, at 4.3% this year, but still coming down to 2.3% in 2024. The forecast for economic growth in 2022 was lowered to 2.8% from 4%, while unemployment projections were little changed.