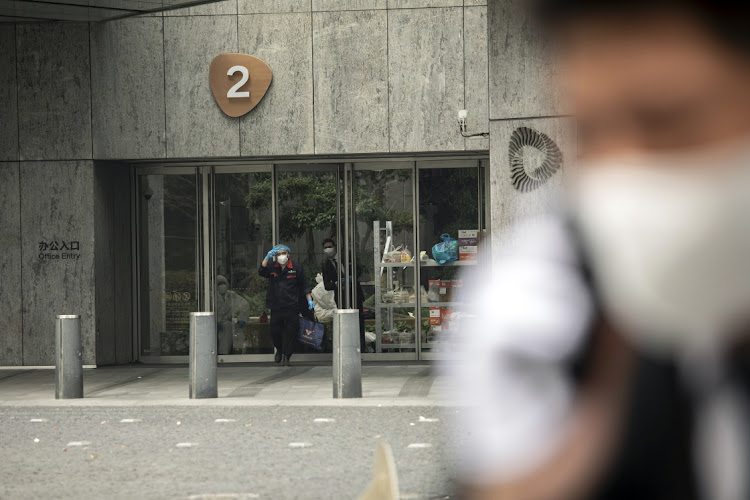 A worker delivers takeout food orders to an entrance at Shanghai Tower placed under lockdown due to Covid-19 in Shanghai, China on Monday, March 14 2022. Picture: BLOOMBERG/QILAI SHEN

Lockdowns aimed at stemming the spread of Covid-19 in China are disrupting the operations of a raft of businesses, with more than 45-million people restricted from leaving their homes as the country faces the biggest challenge yet to its pandemic containment efforts.

Key Apple supplier Hon Hai Precision Industry said it was halting production at its sites in Shenzhen, the southern technology hub that was locked down with little notice on Sunday, its public transport networks halted and 17.5-million residents ordered to limit their movements.

Unimicron Technology, a maker of printed circuit boards, also suspended output in Shenzhen, and BYD, the Shenzhen-based car and batterymaker backed by Warren Buffett, said it was seeing some impact on production. The lockdown, China’s first of a tier-one city, is expected to last until at least March 20, with three rounds of mass testing planned to root out cases.

Meanwhile, the northeast province of Jilin, which borders Russia and North Korea and is home to some 24-million people, was locked down on Monday. It’s the first time China has levied movement restrictions on an entire province since the early days of the pandemic, when Hubei was sealed off.

The move caused Toyota to suspend operations at its factory making RAV4 SUVs in the capital, Changchun, while Volkswagen said three plants in the city run with its local partner China FAW Group would close until at least Wednesday. Jilin is also home to the nation’s largest mineral reserves and is a key farming area.

Another lockdown was called early on Tuesday for Langfang, a city of about 5.5-million people about 55km southeast of Beijing, close to the capital’s new international airport, Daxing.

The lockdowns threaten to further upend supply chains already stretched by materials shortages, shipping delays and the uncertainty triggered by Russia’s invasion of Ukraine. Shares of Apple and its suppliers fell on the news, even as Hon Hai, known as Foxconn and a key iPhone manufacturer, said it expected no “major” impact from the shutdown.

Since quelling the original coronavirus outbreak that emerged out of Hubei’s capital, Wuhan, in late 2019, China has had long virus-free stretches and has one of the lowest fatality rates of major economies. The country of 1.4-billion hasn’t seen a Covid death since January last year. But maintaining that is becoming increasingly difficult — and disruptive — with more transmissible virus variants such as Omicron snaking through the tough border curbs and mass-testing efforts that are the hallmark of China’s Covid Zero strategy.

“Previous steps to contain virus flare-ups left manufacturing unscathed for the most part,” said Chang Shu, chief Asia economist for Bloomberg Economics. These moves “will hit output in key industries such as tech and machinery that feed into global supply chains”.

New cases in the current outbreak went from just more than 1,000 reported on Friday to more than 5,000 on Tuesday — small numbers by global standards, but the highest tallies China has seen since the Wuhan days. Infections are popping up countrywide, from Beijing to the eastern port city of Qingdao and several locations in manufacturing powerhouse Guangdong province.

Factories in Dongguan, a key factory hub in Guangdong, were suspended in areas with virus outbreaks on Tuesday, after the city’s subway network, dining in at restaurants and schools were suspended on Monday.

Plants that are able to create a bubble for staff with daily Covid testing may be able to remain open, authorities in Shenzhen and Dongguan said.

Toyota already shuttered a plant in the city of Tianjin, near Beijing, in January as staff were ordered to undertake multiple rounds of compulsory Covid testing. Small business in Ruili, a city on China’s border with Myanmar, has all but ceased after at least four lockdowns triggered by the discovery of a handful of Covid cases.

Restrictions on domestic travel during key holiday periods over the past six months have also blunted consumer spending and the recovery of the services sector. With cases flaring in Shanghai as well, China is looking at diverting all international flights away from the financial centre, Bloomberg News reported Friday.

The focus on Covid Zero, which is resource-intensive and disruptive, will make it harder for China to hit its economic growth target for 2022, according to Nomura Holdings. Massive fiscal spending on fighting the virus could reduce government investment in other “more productive” areas, Nomura economists wrote in a note last week.

Lockdowns could affect half of China’s GDP,  and have flow-on effects for other economies, economists at Australia & New Zealand Banking Group say. Morgan Stanley cut its growth forecast for China to zero for the current quarter due to the restrictive Covid measures, and also predicts the country will miss its annual GDP target of about 5.5%.

Shenzhen, home to the headquarters of tech giants Tencent Holdings and Huawei Technologies, accounts for 11% ($1.96-trillion) of China’s GDP, equivalent to the economies of Spain and South Korea. Guangdong accounted for 23% of China’s exports in 2021, while Changchun in Jilin was responsible for 11% of total car output in 2020.

While Shenzhen’s Yantian port remains open, stepped-up Covid controls are in place. Concern about potential delays — and with Qingdao also seeing a virus outbreak — is already leading to last-minute rerouting and disruption for container shippers.

About 72 vessels were spotted off Qingdao port on Monday, almost double the number at end-February, according to shipping data compiled by Bloomberg. The increased delays there and in other parts of China are expected to push up freight rates.

Mainland China and Hong Kong are the last two major holdouts pursuing a Covid-19-zero strategy, though the emergence of the Omicron variant is posing ...
News
5 months ago

Widespread Chinese lockdowns could hit half of GDP

Widespread Chinese lockdowns could hit half of GDP