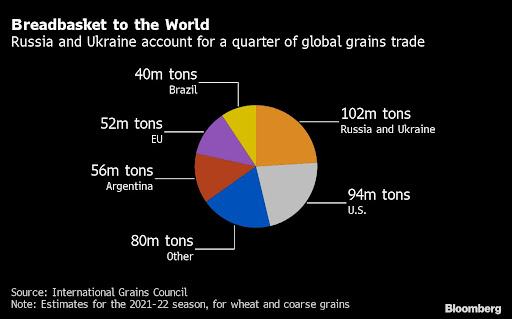 The global food system is under threat as Russia’s invasion of Ukraine puts one of the world’s major breadbaskets in jeopardy. Here are the latest developments and their far-reaching impacts:

The Ukraine war threatens staple crops from Europe’s key grain-growing regions, which means escalating food prices that have already been plaguing consumers about the world could get worse, raising the threat of a full-blown hunger crisis. The UN warned that already record global food costs could surge another 22% as war stifles trade and slashes future harvests.

Grains are the staples that feed the world, with wheat, corn and rice accounting for more than 40% of all calories consumed. Higher shipping costs, energy inflation, extreme weather and labour shortages have made it harder to produce food. And supply is shrinking: grain stockpiles are poised for a fifth straight annual decline, according to the International Grains Council. The war in Ukraine stands to only push prices up further, sending hunger to unprecedented levels.

Global food prices are at all-time highs, with a benchmark UN index soaring more than 40% over the past two years. Food insecurity has doubled in that period, and 45 million people are estimated to be on the brink of famine. Agricultural markets are also soaring. Wheat hit an record in Chicago on Tuesday. Corn and soybeans are trading near multiyear highs.

Governments are taking steps to keep food supplies closer to home, a move likely to prolong food inflation. Hungary, Indonesia and Argentina are among a cluster of countries that have imposed trade barriers on agricultural exports ranging from wheat to cooking oil in an attempt to suppress domestic prices and safeguard local food supplies after Russia’s invasion led to widespread panic about shortages. Russia added to this spate of protectionism when it signalled plans to restrict trade of some raw materials. A major Ukraine food exporter, MHP SE, pivoted to supplying the Ukrainian army and civilians in bombed-out cities.

Trade restrictions could cause international prices to rise even higher due to tightening global supplies, according to Steve Mathews, head of strategy at Gro Intelligence. “It adds greatly to the inflationary concerns,” he said.

Other global suppliers may take strides to fill stockpile shortfalls. India, for example, has increased wheat shipments in recent years and could boost exports to a record 7 million tonnes if the conflict drags on. But many nations that could typically offset shortages are themselves facing production problems. In Brazil, a major supplier of corn and soybeans, crippling drought has parched crops. Dry weather also wilted fields in Canada and parts of the US last year. North American farmers could see current prices as a reason to plant more in the coming weeks, but it will be months before those acres get harvested.

Everything that goes into growing food is getting pricier. Russia, a big supplier of every major type of crop nutrient, urged domestic fertiliser producers to cut exports earlier this month, stoking fears of shortages of crop inputs that are vital to growers. Russia’s move adds uncertainty to the global market when farmers in Brazil — the world’s largest fertiliser importer — are already having trouble getting nutrients for crops. Russian President Vladimir Putin said his country will supply fertilisers to nations that have “friendly relations” with Russia, though it first needs to guarantee fertiliser supplies for the domestic market.

Fertiliser prices have been soaring worldwide amid supply snags and production woes. In Europe, soaring prices for natural gas — a key input for the production of nitrogen fertilisers — has already forced some facilities to curtail production. The price of fuel, used by farmers to heat barns and run equipment used to produce food, is also skyrocketing. Adding to the stress are sanctions against Russia, a major energy supplier to the world, with the US and UK moving to ban imports of Russian crude and other oil products.

“In the current high-priced environment, farmers will face difficulties paying for and/or acquiring the credit they need to purchase inputs,” Alexis Maxwell, an analyst for Bloomberg's Green Markets, said. “Any scarcity risks curbing grain yields and quality, adding pressure to crop prices.”

Ships carrying grain appear to be moving again out of the Azov Sea, the waterway that’s straddled by Russia and Ukraine and connected to the Black Sea. Russia’s attack had initially thrown the world’s wheat and vegetable oil supplies into chaos as vessel traffic came to a halt in the region. The Black Sea is also an exporting market for major fertilisers. Still, fears of crew safety and insurance premiums are discouraging ship owners from sending ships to Ukraine or Russia, and flight bans have made it difficult for Russian seafarers to get to their ships or to return home. Ukraine and Russia together account for more than a quarter of the global trade in wheat, as well as a fifth of corn sales.

Contending with the dizzying rally in agricultural markets is no easy task, particularly for countries reliant on foreign supply. Shock waves are spreading to store shelves, with worries of surging sunflower oil prices triggering heavy buying in Turkey. Even Indonesia, the world’s biggest exporter of edible oils, is feeling the strain: Supermarkets have restricted cooking oil purchases to one pack per shopper and families are bringing their young children to line up so they can buy more.

Worries over food supplies are also growing in the world’s two most populous nations — China and India. Chinese buyers are scooping up US corn and soybeans to secure supplies as Beijing ramps up its emphasis on food security. In India, the blistering rally of vegetable oil is turning away buyers in a sign of demand destruction that some banks and analysts have warned about. The nation is the biggest importer of edible oils and consumers are extremely sensitive to prices.

If grain supplies from the Black Sea remain cut off, it would require even more significant rerouting of global agricultural trade, Gro Intelligence’s Mathews said.

“That realignment will be painful, and the pain will be distributed in order of how much your food budget is relative to your overall income or wealth,” he said.