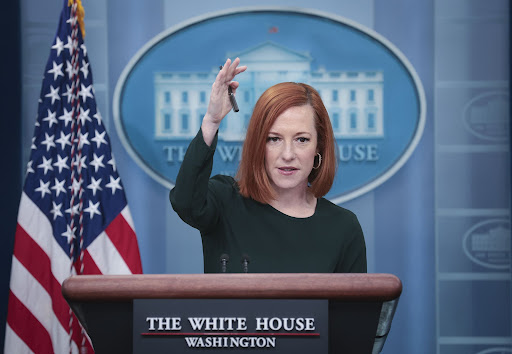 Washington criticised China and Russia for promoting a conspiracy theory that the US military runs biolabs in Ukraine, escalating a dispute over attempts at misleading the public over the war in Europe.

She described the allegations as “preposterous” and the “kind of disinformation operation we’ve seen repeatedly from the Russians over the years”. Psaki also raised concern that Russia may use chemical weapons in Ukraine.

Chinese foreign ministry spokesperson Zhao Lijian hit back at the White House’s stance on Thursday at a regular press briefing in Beijing. “It is wishful thinking to dispel concerns with a few words and irresponsible to call such misgivings of the world disinformation,” he said.

Earlier this week, China accused the US military without evidence of operating “dangerous” biolabs in Ukraine, claims that were then circulated widely on state media in the world’s second-largest economy. The comments mirrored the diversion tactics Chinese diplomats previously used when questioned about the origins of Covid-19, and again referenced Fort Detrick in the US state of Maryland, which the Soviet Union falsely claimed in the 1980s was the source of the virus that causes Aids.

Britain’s defence ministry has said allegations by Moscow that Kyiv is working on biological or nuclear weapons are “likely being amplified as part of a retrospective justification” for the invasion.

When pressed during a Senate hearing on Tuesday about the theories, Victoria Nuland, undersecretary of state for political affairs, said Washington was working with Kyiv to prevent materials from Ukraine’s biological research facilities from falling into Russian hands.

In remarks to senator Marco Rubio, Nuland also raised the possibility of Russia using biological weapons in its invasion. “There is no doubt in my mind, senator, and it is classic Russian technique to blame on the other guy what they’re planning to do themselves,” she said.

Since 1991, a unit of the US department of defence has co-operated with former satellite states of the Soviet Union, including Ukraine, to secure and take apart weapons of mass destruction that had been left behind. The Nunn-Lugar Co-operative Threat Reduction programme is intended to “support defence and military co-operation with the objective of preventing proliferation”, according to the Center for Arms Control and Non-Proliferation, a US non-profit.

The US and Ukraine’s health ministry signed a treaty in 2005 to prevent any proliferation of pathogens at facilities in Kyiv, Lviv, Odesa and elsewhere that could be used in biological weapons.

Psaki said in the statement that the US complies with international treaties on chemical and biological weapons, “and does not develop or possess such weapons anywhere”.

The only countries able to get through to Moscow, oppose the invasion and sent arms or aid to Ukraine
Opinion
5 months ago

Boris Johnson defends visa restrictions for  refugees, saying they are to protect Britain against ‘unscrupulous Putin methods’
World
5 months ago
Next Article