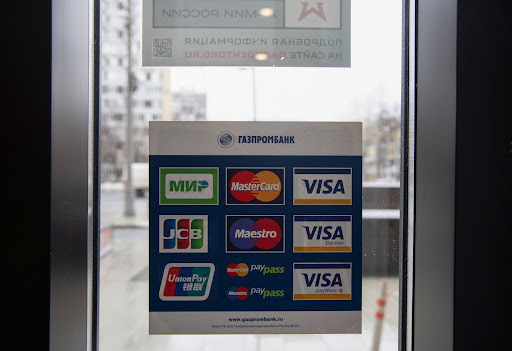 As Visa and Mastercard move swiftly to limit their business in Russia, their developing rivals face a challenge to fill the gap.

After watching its economy suffer at the hands of Western sanctions nearly a decade ago, Russia’s central bank created its own payments operation and branded network that could credibly challenge Visa and Mastercard.

Those efforts face a test as the two US-based technology giants rush to suspend operations, preventing overseas payments by Russian cardholders and halting foreigners from making transactions on Russian soil.

“Russian domestic transactions continue to be processed over Russian national infrastructure,” Visa chief product officer Jack Forestell told investors last week. “We will not generate revenue from any of those transactions that are processed in Russia, even if it is a transaction from a card carrying a Visa mark.”

Visa and Mastercard are joining a growing exodus of foreign companies from Russia as its war against neighbouring Ukraine continues to intensify. Russia’s shrinking ability to pay for goods and services compounds the decreasing availability of foreign products. Luxury brands such as LVMH and Chanel and mass-market retailers including H&M and Mango have temporarily shuttered Russian outlets.

An overwhelming majority of the world’s governments have condemned the Russian war on Ukraine as a breach of international law. They have been ratcheting up sanctions since the invasion almost two weeks ago, likely plunging the country —  and its population — into a deep recession.

“The early signs suggest that the current crisis is at least as serious for Russia as the great financial crisis of 2008-9 or the debt default of 1998,” Bloomberg Economics economist Scott Johnson wrote on Friday. “The economic fallout will be commensurately large, with the price for Vladimir Putin’s war almost certain to be a deep recession.”

Russia has spent years preparing its payment systems for a ratcheting-up of sanctions. The country’s central bank began by creating Russia’s National Payment Card System, or NSPK, and required all domestic transactions to be processed using the system’s technology. Even using cards with Visa and Mastercard logos, a Russian consumer’s payment to a Russian grocer is processed using NSPK. That’s why those cardholders can still make payments locally even after Visa and Mastercard bans go into effect.

The central bank also began working with banks to issue cards with its own branded network, Mir.

Mir’s logo now dots 75-million debit cards across Russia, or 30% of the market. Russian financial institutions are using Mir as well as rivals like China’s UnionPay to blunt the impact of the moves by Visa and Mastercard. In Russia, UnionPay has partnered with about 30 local banks and issued more than four million cards. More than 85% of the country’s point-of-sale systems and ATMs accept UnionPay cards.

Sberbank of Russia said it is looking at the possibility of issuing cards using both networks. A spokesperson for Russian lender Tinkoff Bank said it is working to start offering cards with UnionPay.

For Visa and Mastercard, it’s a delicate dance. The companies have spent years fighting nationalism, working to persuade governments to use their technology rather than build domestic payments systems.

Russia, with its moves in recent years, is following in the footsteps of countries including China and India.

“Local governments, for obvious reasons, want to maintain some type of control over their payments system,” said KBW analyst Sanjay Sakhrani. “If you’re looking at what’s happening here and you’re another country and you get into a conflict for whatever reason, it shows the importance of having a domestic payment system.”

Company’s strategic review of Rusal, in which it owns nearly 57%, is at a preliminary stage
Companies
5 months ago