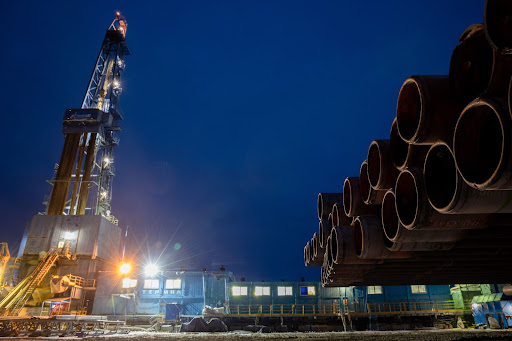 US stocks tumbled on Monday amid fears that rising energy costs related on Russia's invasion of Ukraine would put the brakes on global economic growth.

Oil jumped on the prospect of a ban on Russian supplies, with Brent crude rising as high as $139 a barrel, before trading closer to $125. West Texas Intermediate traded near $120. European gas, palladium and copper hit all-time highs.

The White House on Monday said President Joe Biden has not made a decision on a ban on Russian oil imports. A ban  could add to economic pressure as more companies pull out of the country in response to Moscow’s invasion of Ukraine. EU governments were divided over whether to join the US.

“The longer oil prices and inflation remain elevated — and thereby threaten an early demise of this economic expansion and bull market — the more investors will trim their exposure to equities,” wrote Sam Stovall, chief investment strategist at CFRA. “Investor uncertainty should elevate the angst.”

The US bond market’s 10-year inflation forecast jumped to a record 2.785%, while the yield on the benchmark Treasury bond rose 5 basis points at 1.77%. A gauge of the dollar rose for a third day, trading at the highest since 2020.

Bitcoin fell below $38,000, touching its lowest price in a week. The largest cryptocurrency dropped as much as 4.8% in New York trading hours. Ether, on the other hand, declined as much as 7% to trade at its lowest since February 24. Other popular tokens such as Solano, Cardano and Avalanche tumbled.

A new round of talks on Monday between Ukrainian and Russian officials made only limited progress on negotiating a ceasefire, the government in Kyiv said. There was no immediate statement from the Russian negotiators. With President Vladimir Putin saying Kyiv must agree to his demands if fighting is to end, the discussions face severe challenges. The talks are set to continue.

Putin signed a decree allowing the government and companies to pay foreign creditors in roubles, seeking to stave off defaults while capital controls remain in place. Still, some holders of a $1.3bn Gazprom bond due on Monday said they received payment in dollars.

More businesses pulled back on their operations in Russia, including streaming giant Netflix and social media service TikTok, which is owned by China-based ByteDance.

Meanwhile, China warned the US against trying to build what it called a Pacific version of Nato, while declaring that security disputes over Taiwan and Ukraine were “not comparable at all”.

The global economy was already struggling with high inflation due to the pandemic. The Federal Reserve and other key central banks now face the tricky task of tightening monetary policy to contain the cost of living without upending economic expansion or roiling risky assets.

“There’s no easy map for navigating market volatility,” said Saira Malik, chief investment officer at Nuveen. “Volatility is normal late in economic cycles, and it is needed to some degree to generate positive returns in any environment. Investors, however, are concerned that this latest market disruption could hasten the end of the cycle.”

Lisa Shalett, chief investment officer at Morgan Stanley Wealth Management, said: “The most obvious interpretation of the Russia-Ukraine situation is that extended disruptions to global commodity markets will push inflation higher for longer while economic growth slows as global trade and supply chains remain constrained. Such conditions could lead to stagflation.”

Since the invasion began on February 24, oil prices have increased by about $30 a barrel
News
3 months ago

Fighting stops efforts to evacuate about 200,000 people, with no sign that sanctions are deterring invasion
World
4 months ago
Next Article