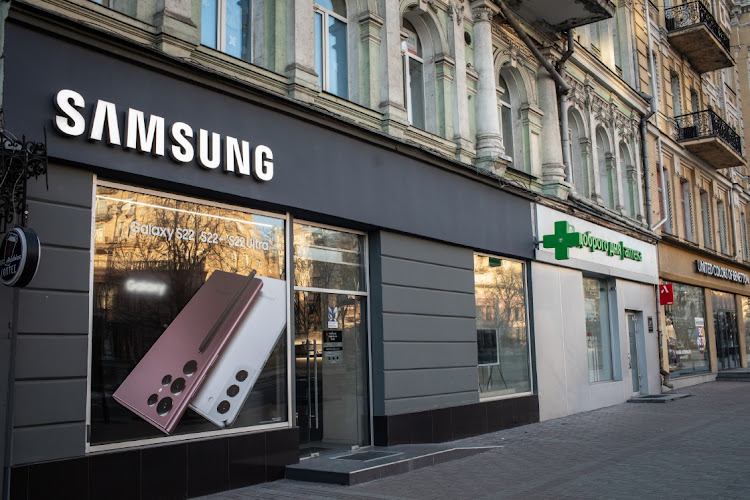 A closed Samsung Electronics store is shown on a deserted street in central Kyiv, Ukraine, in this February 28 2022 file photo. Samsung has suspended product shipments to Russia due to current geopolitical developments, joining a growing list of companies from Apple to Microsoft that are halting sales and services in the country following its invasion of Ukraine. Picture: BLOOMBERG/ERIN TRIEB

Samsung Electronics has suspended product shipments to Russia due to current geopolitical developments, joining a growing list of companies from Apple to Microsoft that are halting sales and services in the country after its invasion of Ukraine last week.

The South Korean tech giant is actively monitoring the complex situation, the company said in an emailed statement to Bloomberg. Exports to Russia of all Samsung products ranging from chips to smartphones and consumer electronics have been suspended, according to a person familiar with the matter.

“Our thoughts are with everyone who has been impacted and our priority is to ensure the safety of all our employees and their families,” Samsung said in the statement. The company is donating $6-million, including $1-million in consumer electronics products, to humanitarian efforts in the region.

Tensions increased on Friday after Ukraine said that Russian forces attacked a nuclear power plant in the southeast part of the country, raising the stakes in the war and prompting calls for an even more robust response to the Kremlin’s aggression. The EU, US and UK have compiled an extensive list of sanctions in an effort to isolate the country, financially, economically and technologically.

Beyond concerns about the war, operating in Russia has become challenging for outside companies, given the sanctions, a US ban on transactions with the country’s central bank and a precipitous decline in the rouble.

Microsoft on Friday condemned Russia’s “unjustified, unprovoked and unlawful invasion” of Ukraine and said it was suspending all new sales of products and services in Russia. Apple has halted sales of iPhones and started limiting Apple Pay services and other popular products in Russia, and removed the RT News and Sputnik News applications from App Stores outside the country. HP, the largest supplier of PCs to Russia, has stopped exports to the country as has Intel Corp.

Ahead of the Samsung announcement, Mykhailo Fedorov, who serves as Ukraine’s vice prime minister and oversees digital operations, sent a letter to Samsung vice chairman Han Jong-hee to urge the Korean tech giant to temporarily cease supplying services and products to Russia.

“We believe that such actions will motivate the youth and active population of Russia to proactively stop the disgraceful military aggression,” Fedorov said in the letter which was posted on Friday on his Twitter account.

“We need your support — in 2022, modern technology is perhaps the best answer to the tanks, multiple rocket launchers and missiles targeting residential neighbourhoods, kindergartens, and hospitals. Stay with Ukraine and save millions of innocent lives!”

Samsung is the leading smartphone seller in Russia, with a market share that’s slightly above 30%, according to a report by Hana Financial Investment. Smartphone sales in Russia account for about 4% of the company’s global revenue from the devices. Samsung also has a TV production plant in Kaluga, Russia.

Although South Korea has received an exemption from the US export controls on Russia, the suspension of shipping channels and flights into the country would make it difficult for Korean companies to send products to the region anyway. Korean Air Lines said on Friday that it would skip its cargo services to Moscow for two weeks, while ocean carrier HMM halted bookings in and out of St. Petersburg.

The Korean government said last week that the war in Ukraine would have a limited impact on the economy in the short term as its trade exposure is minimal. It warned that prolonged tensions could turn negative due to supply disruptions, uncertainties in financial markets and a slow economic recovery.

Exports to Russia accounted for 1.5% of South Korea’s total exports last year, while imports totalled 2.8%, according to the finance ministry.