Russia is Renault’s second-biggest market, and it’s paying a heavy price for a $1bn deal sealed in 2007 with a top ally of Vladimir Putin

Volkswagen, BMW and Toyota have idled Russian plants and suspended shipments to the country as part of a broader retreat by global corporate giants. The one vehicle maker with the most to lose, Renault, has remained conspicuously silent.

The French company has lost nearly 30% of its market value in the wake of Russia’s invasion of Ukraine and ensuing economic sanctions. Russia is Renault’s second-biggest market, and it’s paying a heavy price for a $1bn deal sealed in 2007 with a top ally of Russian President Vladimir Putin.

Renault’s majority control of AvtoVaz, the Soviet-era maker of Ladas, and reliance on Russia for about 12% of its revenue are now matters of investor concern. Cutting ties with the venture would come at a tremendous cost, and prospects for a broader economic slump across Europe risk derailing its already-tenuous turnaround efforts.

“It would be perfectly legitimate for Renault to consider an exit from AvtoVaz,” said Jefferies analyst Philippe Houchois. “Renault could take the loss, but an exit would be a tough decision.”

Russia accounted for about €5bn of Renault’s revenue in 2021, and roughly €315m of operating profit could be at risk, Bloomberg Intelligence estimates. Renault shares continued their downward slide that started last week falling as much as 7.5% Friday to the lowest since November 2020.

As a flood of companies worldwide pull back and unload assets in Russia, Renault and the French government — its most powerful shareholder — have kept mum on AvtoVaz. So has the other partner in the venture, Rostec State Corp., a Russian government-owned defence conglomerate headed by Sergey Chemezov, a close ally of Putin.

“Renault has promised to abide by sanctions,” Gabriel Attal, the French government spokesperson, said Thursday on France Info radio. A spokesperson for AvtoVaz declined to comment beyond operational issues. Renault continues to monitor the situation, according to a spokesperson.

Renault’s foray into Russia a decade and a half ago was decided at the highest political levels, and any exit would be politically fraught. If the company stands pat, it could have a hard time collecting money from a business it’s sunk more than $2bn into over the years.

“One risk for Renault is that capital controls could prevent it remitting profits or cash from AvtoVaz and its other Russian operations,” said Redburn analyst Charles Coldicott. 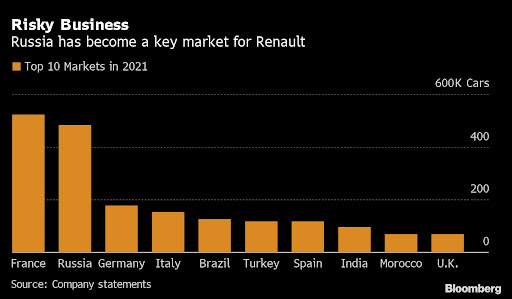 Back in 2007, Putin dictated Renault’s initial deal for a 25% stake in AvtoVaz under former leader Carlos Ghosn. The accord was backed by France and spearheaded by Chemezov. The Rostec CEO’s close ties with Putin trace back to when they lived in the same Dresden apartment complex in Germany during the 1980s as the future president worked as a KGB officer.

“When we decided to move into Russia and make this alliance with AvtoVaz everything was fine,” Ghosn said Thursday in an interview with Bloomberg TV. “It made a lot of sense.”

Ghosn, who was ousted from his role in 2018, said he was surprised that Renault’s current management hasn’t communicated on the situation. “I’m stunned by the fact that it’s complete silence.”

Following Renault’s initial investment in AvtoVaz, subsequent increases in its shareholding were also piloted by the Russian state. Russia now accounts for about 18% of the company’s total vehicle sales. AvtoVaz in 2021 sold about 385,000 Ladas, mostly in Russia.

AvtoVaz’s reliance on the domestic market means a deep economic slump would spell trouble. “Historically, during times of recession in Russia AvtoVaz has been heavily loss making,” Coldicott said.

Founded with the help of Fiat in 1966 when Russia was part of the Soviet Union, AvtoVaz’s Ladas had almost 80% of the market during the Communist era and still command about a fifth of the Russian market. Renault has refurbished its huge Togliatti plant on the banks of the Volga River and redesigned the cars to try to reverse local consumer perception of shoddy workmanship and style.

Brightening prospects in recent years for Lada formed part of Renault CEO Luca de Meo’s revival plan for the group. He forecast an “incredibly profitable” business model for the Lada and Dacia budget-car brands, with shared manufacturing processes and technology.

The war in Ukraine isn’t the first time AvtoVaz has tripped up Renault. Within a year of its initial investment, the financial crisis saw AvtoVaz’s value plummet and Putin pressed Renault to come to the rescue. Ghosn’s move to take a controlling stake for Renault and Japanese partner Nissan was aimed at gaining a foothold in one of the biggest emerging growth markets — the so-called BRICs at the time — after mostly missing out in the others.

Then in 2014 a first round of sanctions hit after Putin annexed the Ukraine region of Crimea. Renault acquired a controlling 51% stake in 2016 after Ghosn pledged to do “whatever it takes” to back the loss-making venture on the verge of collapse.

The ongoing war in Ukraine is now posing a new and perhaps more serious threat to the carmaker because of the potential to reverberate beyond Russia’s borders.

“Renault’s turnaround plan is predicated on a recovery in the European auto market,” Houchois said. “The longer the crisis continues, the greater the likelihood of a recession in Europe.”