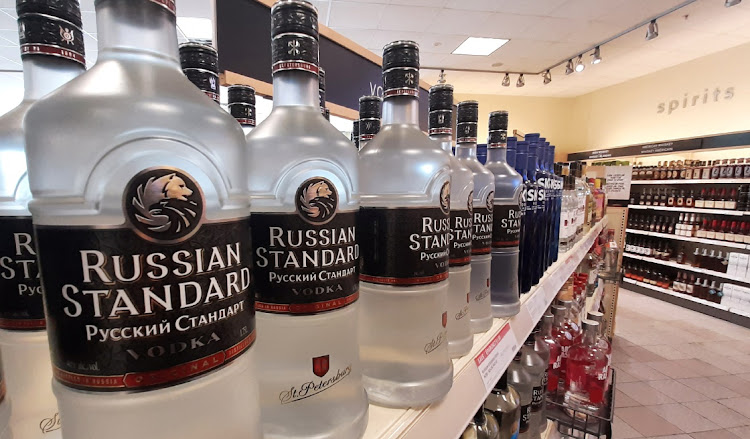 Bottles of Russian Standard Vodka are seen in a LCBO store in Ottawa, Ontario, Canada, in this February 25 2022 file photo. Picture: REUTERS/PATRICK DOYLE

An international boycott of Russian vodka is building from the US to Australia, as politicians and corporations signal their opposition to President Vladimir Putin’s invasion of Ukraine by targeting one of his country’s most iconic products.

At least three US governors ordered the removal of Russian-made or branded spirits from stores, while one of the largest alcohol retail chains in New Zealand pulled thousands of bottles of vodka including the Ivanov and Russian Standard brands — and filled the empty shelves with Ukrainian flags. Boycotts are spreading to other goods in Russia’s European neighbours.

Two of Australia’s biggest liquor chains, Dan Murphy’s and BWS, have stopped selling products of Russian origin, according to Sydney-based owner Endeavour, which has a market value of A$12.6bn ($9.2bn).

The moves echo steps taken by global corporations from energy giants to automakers and law firms to cut ties with Russia or review their operations as governments impose sanctions on the country. Soccer authorities Fifa and Uefa have also banned Russian teams from competitions.

New Hampshire governor Chris Sununu said on Twitter that the state “stands with the people of Ukraine in their fight for freedom.”

Utah governor Spencer J Cox said the state “stands in solidarity with Ukraine and will not support Russian enterprises, no matter how small the exchange.”

Describing Russia’s attack on Ukraine as “an egregious violation of human rights”, Cox issued an executive order forcing the Utah department of alcoholic beverage control to remove all Russian-produced and Russian-branded products from shelves immediately.

There are about 6,400 bottles of vodka made by Russian Standard for sale in Ohio’s 487 liquor agencies across the state, DeWine said.

The steps may be largely symbolic. Vodka from Russia accounts for little more than 1% of the total value of imports of the spirit into the US, according to data from the country’s Distilled Spirits Council.

In Russia’s Nordic neighbour Finland, the government’s liquor monopoly Alko stopped selling 20 sorts of vodka, including a $480 bottle, while a lobby group for the hospitality industry told bars and restaurants they should consider following suit.

The scale of the boycott was reduced due to a deal that a Polish private food and beverages group Maspex completed on February 25, a day after the Russian invasion began. The company paid $1bn to buy CEDC, the country’s biggest vodka distributor and the maker of the Zubrowka brand, with about 47% share in the Polish market, from Russia’s Roust Corporation.

“Our boycott won’t cause big damage for Putin’s businesspeople but it’s a matter of principle — our people don’t fund those, who finance the war,” Lithuanian Prime Minister Ingrida Simonyte said.

But the French firm, which holds a 19.4% stake in Novatek, Russia’s largest producer of LNG, says it ‘will no longer provide capital for new projects ...
Business
4 months ago

Russia is a significant market for Hollywood, accounting for $601m in box office in 2021, or about 2.8% of worldwide ticket sales
World
4 months ago

This puts a wide swath of Russia — a key route for travel between Europe and Asia — off-limits for big carriers such as Air France-KLM and Deutsche ...
News
4 months ago
Next Article