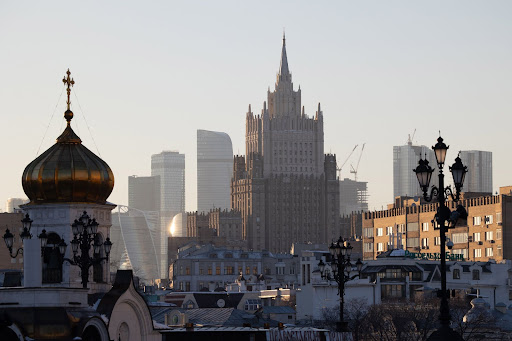 The cost of insuring Russia’s government debt rose to a record after harder-hitting sanctions on the country prompted Moscow to take emergency measures to shield its financial sector. Picture: BLOOMBERG

The cost of insuring Russia’s government debt rose to a record after harder-hitting sanctions on the country prompted Moscow to take emergency measures to shield its financial sector.

Credit-default swaps insuring $10m of the country’s bonds for five years were quoted at about $4m upfront and $100,000 annually on Monday, signalling about 56% likelihood of default, according to ICE Data Services. ICE is the main clearing house for European CDS.

It’s the first time the contracts haven’t been quoted in basis points, ICE data show. Protection sellers typically switch to demanding payment in advance when they reach about 1,000 basis points, or when perceptions of default risk are imminent.

“For the first time today, sellers officially demanded upfront costs to sell protections,” said Jav Bose, head of CDS content and analytics at ICE. “It reached a threshold where it was becoming increasingly difficult for traders to quote on spread terms.”

President Joe Biden’s administration on Monday announced further financial penalties against Russia designed to shake an already staggering Russian financial system. The moves came two days after the US, UK, Canada and the EU said they would block major Russian banks from Swift, take steps to stop Russia’s central bank from rescuing the nation’s economy and move to seize Russian oligarchs’ assets in the West.

Swaps protecting Russia’s debt for one year also surged to imply a 40% probability of default, the data show. Both the five- and one-year contracts assume a recovery of 25%.

Russia has about $33bn of dollar-denominated bonds outstanding, according to data compiled by Bloomberg. The country’s $7bn of bonds due in June 2047 fell about 3c on the dollar to 68c, the data show.

Meanwhile, hundreds of rouble bond suspensions resulted in wild variations in quotes for Russian debt, where liquidity remained thin and even finding a venue to trade became harder.

Default swaps trading picked up as tensions escalated, with volumes surging on Friday amid wild price swings, according to people familiar with the matter, who asked not to be identified.

This puts a wide swath of Russia — a key route for travel between Europe and Asia — off-limits for big carriers such as Air France-KLM and Deutsche ...
News
2 months ago
Next Article