Bloomberg Economics examines how the conflict could impact growth, inflation and monetary policy 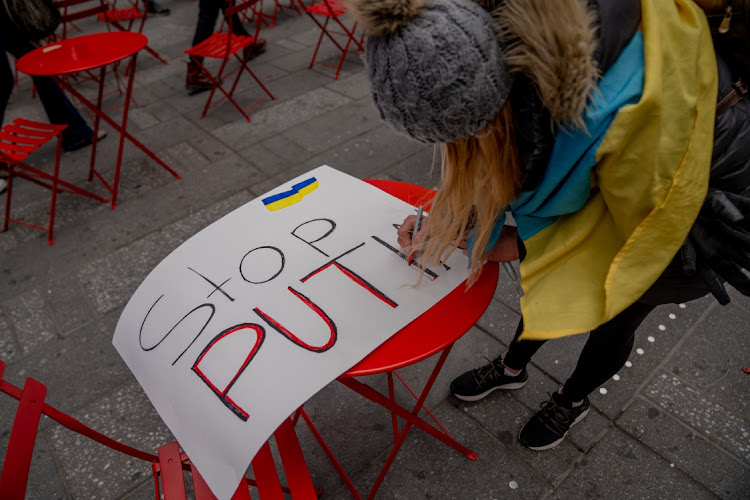 A protester creates a "Stop Putin" sign during a demonstration against the Russian invasion of Ukraine in the Times Square neighborhood of New York, US, on February 24 2022. Picture: BLOOMBERG/AMIR HAMJA

Russia’s invasion of Ukraine carries huge risks for a world economy that’s yet to fully recover from the pandemic shock.

The conflict already looks like the most serious war in Europe since 1945. Russian forces carried out air strikes, captured army bases and advanced towards Kyiv as civilians fled. Western officials said the capital may fall at any time, with its air defences eliminated.

The assault followed weeks of tensions that already sent tremors through the world economy by ratcheting up energy prices. That accelerated on Thursday. Oil briefly climbed past $100 a barrel for the first time since 2014, while European natural gas jumped as much as 62%.

As Ukraine fights for survival, Western governments are taking steps to punish Russia. They’re aware that by doing so, they could heighten the conflict’s impact on their own economies.

US President Joe Biden — who on Thursday announced new sanctions that target Russia’s banks and its ability to trade in dollars — has warned that there’ll be also a price to pay at home, where expensive gasoline is already eroding his support among voters.

The pandemic has left the global economy with two key points of vulnerability — high inflation and jittery financial markets. Aftershocks from the invasion could easily worsen both.

There’s a threat to growth too. Households spending an ever-larger chunk of their incomes on fuel and heating will have less cash for other goods and services. Plunging markets would add another drag, hitting wealth and confidence, and making it harder for firms to tap funds for investment.

For central bankers, the twin challenge — of managing prices and keeping their economies growing — will get even harder. The Federal Reserve and European Central Bank have been gearing up to tighten monetary policy. The Russia crisis may force a rethink.

Just how big a blow the conflict ends up delivering to the global economy will depend on its length and scope, the severity of Western sanctions, and the possibility that Russia might retaliate. There’s the potential for other twists too, from an exodus of Ukrainian refugees to a wave of Russian cyber attacks.

Bloomberg Economics has captured some of those effects in three scenarios that examine how the war could impact growth, inflation and monetary policy. 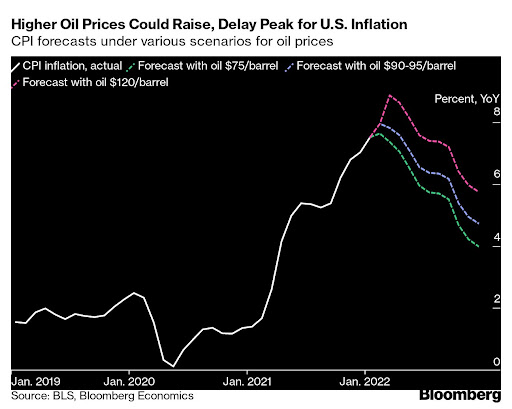 In the first, a swift end to fighting prevents a further upward spiral in commodity markets, keeping US and European economic recoveries just about on track. Central bankers would have to tweak their plans, not scrap them.

In the second scenario, a prolonged conflict, tougher Western response and disruptions to Russia’s oil and gas exports would deliver a bigger energy shock and a major blow to global markets. That would likely take ECB rate hikes off the table this year, while Fed tightening would slow down.

A worst-case outcome would see Europe’s gas supply cut off, triggering a recession, while the US would see significantly tighter financial conditions, a bigger hit to growth, and a markedly more dovish Fed.

Wars are inherently unpredictable, and the actual outcome is likely to be messier than any of these stylised versions. Wild swings in financial markets on Thursday illustrated the uncertainty. Still, the scenarios should help frame thinking about possible paths ahead.

An optimistic scenario sees no disruption to oil and gas supplies, with prices stabilising at their current levels. Financial conditions tighten, but without a sustained slide in global markets.

That kind of optimism was in evidence on oil markets after new sanctions on Russia were unveiled by the US and its allies.

“The sanctions we imposed exceed anything that’s ever been done,’’ Biden said on Thursday. They include penalties on five banks, including Russia’s biggest lender Sberbank, with $1-trillion in total assets. Export controls will limit Russia’s access to hi-tech products, and personal sanctions targeted the country’s elite.

But Russian energy supplies weren’t targeted for punishment. Oil prices dropped in response, with futures closing below $93 a barrel in New York.

Energy prices are the main channel through which the Ukraine war has an immediate impact far from the front lines. The risk is especially acute in Europe, because Russia is its main supplier of oil and gas.

Soaring energy costs accounted for more than half the euro area’s record inflation rate in January. European natural-gas futures peaked above €140 per megawatt-hour on Thursday, after jumping as much as 62% in the day.

Added to the oil effect, that could leave euro-area inflation touching 3% by year-end. There might be other spillovers too from a sanctions-induced recession in Russia. But the bloc would likely escape recession and an ECB rate hike in December would remain in play.

In the US, more expensive gasoline and moderate financial tightening would drag on growth. The country may ship more of its natural gas to Europe, raising prices at home. Headline CPI inflation may exceed 8% in February and end the year close to 5%, compared with the 3.3% consensus.

Still, the Fed would probably look beyond the temporary price shock and go ahead with its plans to start raising interest rates in March — though not by 50 basis points.

“Barring an unexpected turn in the economy, I believe it will be appropriate to move the funds rate up in March and follow with further increases in the coming months,’’ Cleveland Fed president Loretta Mester said on Thursday.

Some oil-tanker owners are avoiding taking on Russian crude until they have more clarity on sanctions. Major gas pipelines run through Ukraine and could be hit in the fighting. Even limited disruption to supply could worsen the shock to energy prices.

A sustained return of gas prices to €180 a megawatt-hour — the level reached in December — and oil at $120 could leave euro-area inflation close to 4% by year-end, intensifying the real income squeeze. Europe would likely be able to keep the lights on. But there’d be a material hit to GDP, which would push any ECB rate hike well into 2023.

“It’s clear that we’re moving towards normalising monetary policy,’’ Austria’s Robert Holzmann, one of the most hawkish members of the ECB’s governing council, told Bloomberg in Paris on Thursday. “It’s possible however that the speed may now be somewhat delayed.’’

In the US, this scenario might push headline inflation to 9% in March and keep it close to 6% by year-end. At the same time, further financial turmoil and a weaker economy, partly due to the European downturn, would leave the Fed conflicted. It might look beyond the temporary price shock and focus on risks to growth. That wouldn’t affect March lift-off, but it could tip the scale towards slower rate hikes in the second half of the year.

Scenario 3: Cutting Off the Gas

Facing maximal sanctions from the US and Europe — like being cut out of the Swift system of international payments — Russia might retaliate by turning off the flow of gas to Europe.

That’s a farfetched outcome: EU officials didn’t even consider it last year when they ran a simulation of 19 scenarios to stress-test the bloc’s energy security. Still, the ECB estimates that a 10% gas rationing shock could trim euro-area GDP by 0.7%.

Scaling that figure up to 40% — the share of Europe’s gas that comes from Russia — implies an economic hit of 3%. The actual figure may be significantly higher, given the chaos that such an unprecedented energy crunch would likely set off. That would mean recession, and no ECB rate hikes in the foreseeable future.

For the US the growth shock would be sizeable too. And there could be unintended consequences from maximal sanctions that disrupt the global financial system, with spillovers for US banks. The Fed’s focus would shift to preserving growth. But if higher prices led to inflation expectations getting entrenched among consumers and businesses, that would raise the worst-case scenario for monetary policy: the need to tighten aggressively even in a weak economy.

The above scenarios, of course, don’t exhaust the possibilities. They’re focused on the world’s biggest advanced economies, but countries everywhere will feel the impact of commodity-price spikes, which include food staples like wheat as well as energy.

Some, like Saudi Arabia and other Gulf oil exporters, might benefit. But for most emerging markets — already suffering slower recoveries — the combination of higher prices and capital outflows could deliver a major blow, and worsen the risk of post-Covid-19 debt crises. Turkey, a big energy importer which already had a plunging currency and soaring inflation before the Ukraine crisis, is an extreme example.

Then there are hard-to-quantify risks such as cyber attacks by Russia. The New York Fed has estimated that an attack impairing payments systems at the five most active US lenders could spill over to 38% of all banking assets, leading in a worst-case scenario to liquidity hoarding and insolvencies.

One thing that does seem clear: Among major economies it will be Russia that suffers the biggest blow. The price for President Vladimir Putin’s expansionist foreign policy will very likely be a shrinking economy at home.