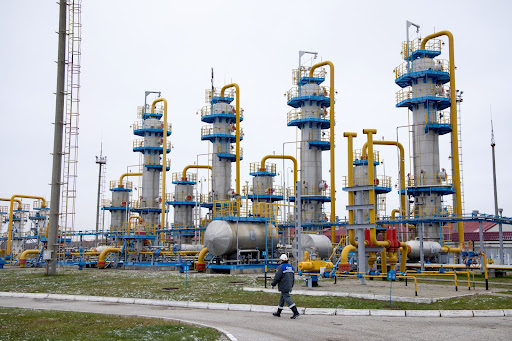 Russian energy exports escaped sanctions from the US as President Joe Biden toughened restrictions on the country on Thursday while avoiding measure that could send oil prices surging even further, worsen Europe’s gas shortage and make petrol more expensive for Americans.

Harsher sanctions announced by Biden on Thursday following the invasion of Ukraine included blocking major Russian banks and cutting off the country from semiconductors and advanced technology, but purchasing and selling Russian energy supplies are still allowed.

“In our sanctions package, we specifically designed energy payments to continue. We are closely monitoring energy supplies for any disruption,” Biden said from the East Room of the White House. “We have been co-ordinating with major oil-producing and consuming countries towards our common interest to secure global energy supplies.”

Russia is a major exporter of energy and raw materials that the world badly needs at a time when shortages of everything from wheat and crop fertilisers to natural gas and aluminium are stoking inflation, forcing central banks to weigh the need to hike interest rates against the risk of economic slowdown. The US, Saudi Arabia and Russia are the world’s biggest oil producers.

Biden also raised the prospect for the US to release more oil from its strategic reserves in co-ordination with other nations, to quell rising energy prices. The US will release additional supplies as conditions warrant, Biden said. That would build on a release of 50-million barrels the US authorised in 2021.

Energy supplies around the world have failed to keep pace with a vigorous recovery in demand after the worst of the pandemic.

Earlier, oil prices topped $105 a barrel in New York on fears that additional escalation could lead to sanctions affecting the energy market or supply disruptions. Europe relies on the nation for about a quarter of its oil and a third of its gas.

After the announcement of new sanctions, oil prices cooled to eliminate almost all of their gains. West Texas Intermediate traded near $93 a barrel   in New York, down from earlier highs above a $100.

Energy traders were looking to see if sanctions would target their crude supplies, said Ed Moya, Oanda’s senior market analyst for the Americas. When that didn’t occur and the US announced it could tap strategic reserves as needed, it allowed prices to drop, he said.