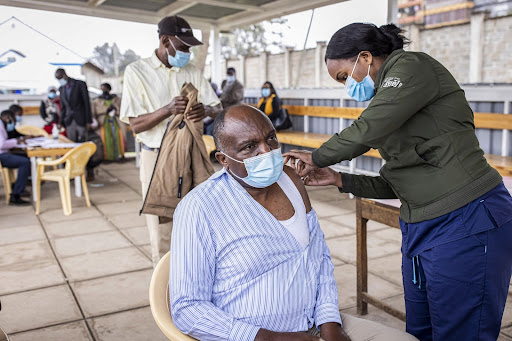 A resident receives a dose of a Covid-19 vaccine at Mbagathi Hospital in Nairobi, Kenya. Picture: BLOOMBERG/PATRICK MEINHARDT

The World Health Organisation (WHO) said six countries in Africa would be given technology to produce mRNA Covid-19 vaccines, as part of its vaccine hub programme that bypassed major pharmaceutical producers of the doses including Moderna and Pfizer.

SA, Egypt, Kenya, Nigeria, Senegal and Tunisia were approved as the first recipients of the initiative, which aims to give countries in Africa the tools and know-how to produce their own shots, the WHO said.

The WHO’s mRNA vaccine hub plans to produce doses on its own using a recipe formulated from publicly available information of existing shots. Africa has lagged inoculation rates in Europe and North America as poorer countries have struggled to secure doses and rich nations have hoarded the jabs.

The vaccines that will be produced under the Africa mRNA hub programme have yet to be approved by health officials, a process that could take more than a year. The WHO has said the programme could be expanded beyond Covid-19 shots to give countries in Africa the ability to produce their own medicines without relying on big pharmaceutical firms in Europe and the US.

The recipients were unveiled at an event on Friday in Brussels that included WHO officials, President Cyril Ramaphosa, French President Emmanuel Macron and Ursula von der Leyen, president of the European Commission.

“The Covid-19 pandemic has shown that reliance on a few companies to supply global public goods is limiting, and dangerous,” WHO director-general Tedros Adhanom Ghebreyesus said in a statement.

Vaccine makers have faced criticism from public health officials and some government leaders for not sharing their formulas and patent protections to get more people vaccinated against the virus, which has killed more than five-million people.

Excess death rate in SA during Covid reaches one in 25 people older than 60 ...

Excess death rate in SA during Covid reaches one in 25 people older than 60 ...