CPI climbs 7.5% from a year earlier reinforcing the Fed’s intentions to begin raising rates in March

US consumer prices surged in January by more than expected, sending the annual inflation rate to a fresh four-decade high and adding more urgency to the Federal Reserve’s plans to start raising interest rates.

The consumer price index (CPI) climbed 7.5% from a year earlier after a 7% annual gain in December, according to labor department data released on Thursday. The widely followed inflation gauge rose 0.6% in January from a month earlier, reflecting broad increases that included higher food, electricity and housing costs.

Excluding the volatile food and energy components, so-called core prices increased 6% from a year ago, also the most since 1982, and 0.6% from a month earlier.

US Treasury yields surged, the dollar rose and the S&P 500 slid at the open. The median forecasts in a Bloomberg survey of economists called for a 7.3% year-over-year increase in the CPI and 0.4% gain from a month earlier. Economists have underestimated the monthly change in the CPI in eight of the past 10 months.

The data reinforce the Fed’s intentions to begin raising rates in March to combat broad-based inflationary pressures and could lead markets to expect even more aggressive action from the central bank. The steady run-up in prices has eroded recent wage gains and diminished American families’ purchasing power, sucking much of the air out of what has been an exceptional bounceback in the US economy. 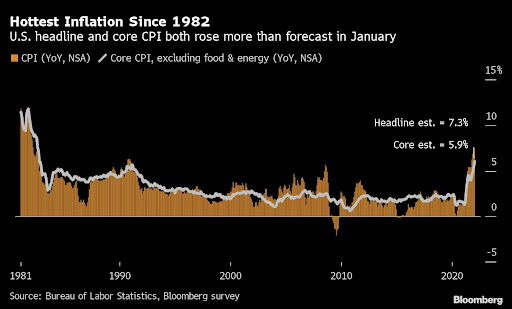 Leading up to the Fed’s March 15-16 meeting, policymakers will also have the February CPI and employment reports in hand.

Investors boosted their expectations for a half-point increase in the federal funds target rate in March after the report. While most economists expect a more gradual approach to lift-off — as has been telegraphed by several Fed officials — the acceleration of inflation on the heels of rapid wage gains will keep the possibility of a half-point hike on the table.

The rapid pickup in inflation boils down in large part to the mismatch between supply and demand. With the help of huge government stimulus, a surge in household purchases strained factories and global supply chains. Capacity constraints of US producers trying to ramp up production were made worse by a smaller pool of available labour.

The tight labour market, in which the unemployment rate is now 4%, has led employers to bid up wages in an attempt to fill millions of job openings and retain workers. In 2021, compensation costs surged by the most in two decades.

Even so, wages aren’t keeping up with inflation. Inflation-adjusted average hourly earnings fell 1.7% in January from a year earlier, marking the 10th straight decline, separate data showed on Thursday.

Shelter costs — which are considered to be a more structural component of the CPI and make up about a third of the overall index — climbed 0.3% from the prior month. The increase reflected the biggest jump in rent of primary residence since May 2001. Owners’ equivalent rent also rose.

Lodging away from home fell 3.9%, the weakest print since April 2020 and likely reflecting reduced travel amid the surge in Covid-19 infections.

Housing prices are expected to offer a tailwind to inflation in coming months. Like wage increases, shelter is often considered a “sticky” component of inflation, meaning once prices rise, they’re less likely to come back down. A sustained acceleration in structural categories like shelter, rather than surges in volatile CPI components such as energy, presents a more serious threat to the central bank’s inflation target.

For US President Joe Biden, the decades-high inflation presents a risk to his party’s razor-thin congressional margins ahead of the midterm elections later in 2022. With many pointing to the White House’s stimulus bill in 2021 as a key driver of the price increases, Biden’s approval ratings have taken a hit as Americans face higher prices at the fuel pump and the grocery store.

Food prices rose 0.9% in January, the most in three months, and energy costs also advanced 0.9% on gains in fuel oil and electricity. Residential electricity costs increased in January by the most in 16 years. From a year ago, food inflation is up 7%, the most since 1981.

The report will probably further diminish the chances Biden’s Build Back Better plan will pass. Senator Joe Manchin of West Virginia, who has repeatedly stalled the legislation, has frequently cited inflation as a reason to slim down the package.

The latest CPI figures also reflect an update to the relative importance of certain categories in the consumer basket. The new weights, which are based on spending habits in 2019 and 2020, include changes like a bigger weighting for used cars and trucks — a reflection of how the pandemic changed consumption patterns in the US.

“This is a goods-dominated inflation backdrop,” said Tom Porcelli, chief US economist at RBC Capital Markets, who noted that merchandise now has a larger weighting in the CPI. “If the transition from goods to services spending is slower to evolve this year, you could continue to see some additional upward pressure on inflation.”

JSE lifts ahead of US inflation data release

Economists expect US inflation in January to have risen 7.3% year on year
Markets
6 months ago