As part of the cutbacks, Peloton plans to eliminate about 2,800 jobs globally, affecting about 20% of corporate positions 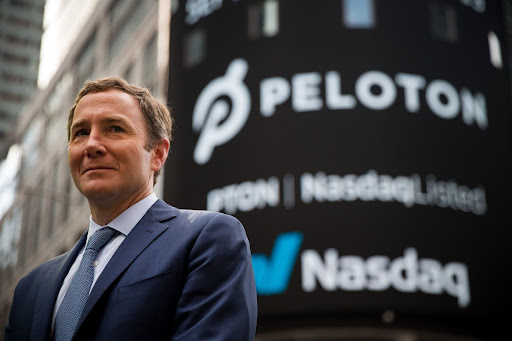 A surprise shake-up at Peloton Interactive  sent the shares on their biggest rally ever on Tuesday and renewed speculation that the ailing fitness company could be a takeover target.

Peloton co-founder John Foley will step down as CEO and become executive chair, the company said, part of sweeping changes that include job cuts and the cancelling of a proposed factory in Ohio. Barry McCarthy, former CFO at Spotify Technology, will become CEO and president, effective on February 9.

The stock surged as much as 36% on the news, with investors betting that a leaner Peloton — under a new CEO — might be poised for a sale. The fitness company said Tuesday that it was open to offers, and many tech and media giants have been cited as possible suitors, including Amazon.com  and Nike.

Peloton had been a high-flyer during the pandemic, when lockdowns sent customers scrambling to buy its stationary bikes and attend classes. With restrictions easing — and many fitness junkies returning to regular gyms — the company faced an investor backlash and had to retool its operations. Even after Tuesday’s gain, the stock has lost about three-quarters of its value over the past year.

As part of the cutbacks, Peloton plans to eliminate about 2,800 jobs globally, affecting about 20% of corporate positions. It’s scaling back its warehouse and delivery operations, and relying more on third-party providers. McCarthy will join the board of directors, and Peloton president William Lynch will become a nonexecutive director.

Activist investor Blackwells Capital  had campaigned for Foley’s departure, but the firm said on Tuesday that the latest changes didn’t go far enough to address its concerns.

“Foley has proven he is not suited to lead Peloton, whether as CEO or executive chair, and he should not be hand-picking directors, as he appears to have done today,” Blackwells Capital Chief Investment Officer Jason Aintabi said in a statement.

Blackwells had published a presentation on Monday calling for the resignation of CFO Jill Woodworth and renewing demands for an immediate sale of the company. Blackwells said Peloton could fetch $75 a share in a sale to a strategic buyer such as Netflix  or Spotify. That’s about twice its current share price, even with Tuesday’s run-up.

Blackwells, which has a stake of less than 5%, has decried Foley’s leadership, citing failed forecasting, inconsistent strategy and governance problems such as a lack of financial controls.

Foley, a former Barnes & Noble e-commerce executive and cycling enthusiast, founded the company after posting a video to Kickstarter in 2013. The company became an early pandemic darling with long waiting lists for its stationary bikes, but then suffered a series of missteps, including product recalls after reported accidents and a child’s death. The company’s public image also took a hit in December, when HBO Max’s Sex and the City  reboot killed off a Peloton-riding character.

At the end of last week, Peloton was valued at just more than $8bn, based on Friday’s closing price of $24.60 a share. That’s below its September 2019 initial public offering price of $29.

“I’m confident that Barry is the right leader to take the company into its next phase of growth,” Foley said in a statement.

But the outlook is cloudy. Peloton lowered its forecasts for growth and subscribers, a sign it’s still struggling to predict demand as people gradually head back to the office. Managing Peloton’s supply chain has been a challenge as well.

Peloton cut its expectations for full-year revenue to $3.7bn to $3.8bn from a previous forecast for as much as $4.8bn. It expects to have 3-million connected fitness subscribers in the coming year, down from a previous estimate of as much as 3.45-million. Woodworth, the CFO, said that’s still up significantly from 700,000 subscribers the company had pre-Covid.

“We believe the opportunity is unchanged,” Woodworth said on a call with investors. “The fitness and wellness industry will continue to grow,” she said.

The company will reduce capital expenditures by about $150m this year and streamline its reporting structures. But Woodworth said it’s not paring back on marketing, which will be “critical to our success going forward.” The restructuring under way is expected to yield at least $800m in annual savings, the company said.

Peloton reported an adjusted loss before interest, tax, depreciation and amortisation of $266.5m in the second quarter, compared with an average analyst estimate of a $288m loss.

Analysts held mixed views on whether Foley’s departure as CEO will pave the way for a sale, or whether the cost cuts and restructuring will create a path to remain independent.

“We are impressed and encouraged to see John Foley and the board add a highly experienced technology/media operator/investor in new CEO Barry McCarthy, and to commit to a sizeable restructuring that we believe is needed,” Jonathan Komp, an analyst at Baird, said in a note to investors.

Any chance for a sale will have to be vetted by Foley, who —  along with other insiders — controls a majority of Peloton’s shares and will be key to deciding on a path for a potential deal. Still, his authority may have its limits, Wedbush analyst Dan Ives said in a note.

“While Foley has supermajority B shares and ultimately controls the fate of Peloton, we believe shareholder pressure will build to solicit bids and sell Peloton to a strategic player with potential bidders Apple, Amazon and Nike likely in the fold,” he said.

Amazon.com and Nike are reportedly considering bids as the New York-based company is exploring options
News
4 months ago

ANDREA FELSTED: February or March could be the new January gym boom period