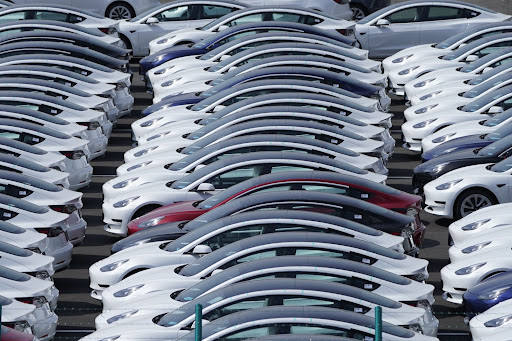 Tesla  is initiating its ninth US vehicle recall in roughly three months, a spurt of safety-related fixes that’s coincided with regulators subjecting the carmaker to greater scrutiny.

The latest recall relates to a software error that may prevent the federally mandated chime that reminds drivers to buckle up from going off. Tesla will remedy the issue with an over-the-air update to more than 817,000 vehicles.

Recalls Tesla has done the past  few months run the gamut of both hardware and software issues. In October and November, there were separate safety campaigns related to suspension problems affecting certain Model 3 and Y vehicles. In December, two recalls announced together pertained to potentially damaged rear-view camera cables and faulty front-trunk latches.

Other fixes had to do with Tesla’s controversial Full-Self Driving capability, a product the company has sold for years and allowed some consumers to beta test before it lives up to its name. The US National Highway Traffic Safety Administration (NHTSA) questioned Tesla’s broader rollout of self-driving capability in October, when the regulator also grilled the company over how it carried out a software update of Autopilot, a separate suite of driver-assistance features.

“Tesla has one foot in auto-making, which is difficult, and they’re not experienced and arguably not that good at it yet,” said Kevin Tynan, a Bloomberg Intelligence analyst. “The other foot is in technology, where this is what you get when you push the envelope and the regulatory environment isn’t completely in place yet.”

The recalls have come against the backdrop of tensions between Tesla CEO Elon Musk and President Joe Biden. Musk — the world’s richest person, according to the Bloomberg Billionaires Index — has bristled at Biden’s unwillingness to give Tesla credit for jump-starting the auto industry’s shift to electric vehicles.

Tesla, which has disbanded its media relations department, did not respond to a request for comment.

The seat-belt chime issue that spurred Tesla’s latest recall was brought to Tesla’s attention on January 6 by a testing and research institute in South Korea, according to the notice on NHTSA’s website. The company isn’t aware of any crashes, injuries or fatalities related to the problem.

More recalls could be in the offing. NHTSA said Wednesday it’s reviewing complaints about the forward-collision avoidance system in Teslas leading the cars to suddenly brake at high speeds.

In August, the agency opened a defect probe of Tesla Autopilot after repeated collisions with police cars and fire trucks. Weeks later, the company Tesla beamed an over-the-air update to its vehicles that sought to improve how Autopilot handles crash scenes. NHTSA asked the carmaker in October to justify making the software change without filing a recall.

Earlier this week, Tesla disabled an FSD setting that had enabled its vehicles to slowly roll through all-way stop intersections at low speeds when no pedestrians or other cars are present. Self-driving car advocates testifying at a House hearing on Wednesday sought to distance themselves from Tesla and the feature, telling legislators the company’s cars don’t qualify as fully autonomous according guidelines that have adopted by federal regulators.

“Tesla is clearly facing more stringent regulatory oversight in recent months than it has previously been subject to,” Michael Brooks, acting executive director and chief counsel of the Center for Auto Safety, said in an email. “NHTSA needs to go one step further and seek the maximum civil penalty available for Tesla’s continued delay and attempts to play fast-and-loose with regulations intended to protect Americans from unproven and potentially unsafe vehicle features.”

Not enough to do while you drive? Tesla’s karaoke mic allows you to sing and swerve

It pairs with the infotainment system, and duets are possible as it comes in a pack of two
Life
5 months ago

There are over 1,400 automated vehicles in testing by more than 80 companies in the US
Life
5 months ago
Next Article