This is why Apple keeps earning its safe-haven status 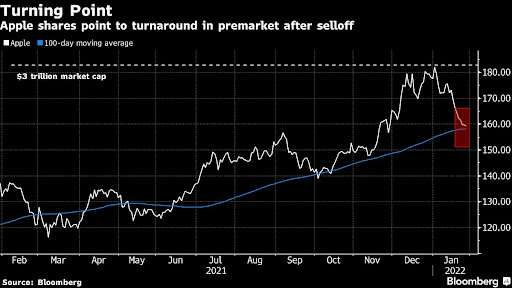 Traders often cite Apple as a safe haven amid the rout in technology stocks, and for good reason.

A sobering note for tech investors, though: even a rally in shares of the world’s biggest company isn’t enough to lift stock prices more broadly. Futures tracking the Nasdaq 100 index were little changed at 6.40am in New York, erasing a 1.4% gain, with worries about tighter US Federal Reserve monetary policy dominating sentiment.

“Just the right amount of everything” and “Apple doesn’t disappoint” were some of the headlines in post-earnings research reports from analysts. The tech giant navigated the crisis and benefited from a flood of new products, including the iPhone 13, Apple Watch Series 7 and updated Macs. Sales of Macs surged 25% to $10.9bn, beating analyst estimates.

With 1.8-billion Apple devices in customers’ hands, the company has a wide range of opportunities to generate revenue, analysts and investors flagged.

The earnings report “highlights the strength, and stickiness, of Apple’s ecosystem,” Morgan Stanley’s Katy Huberty wrote in a note. She reiterated Apple as her top pick for 2022.

While the shares trade at 26.7 times estimated earnings for the next year, a tad above the Nasdaq 100’s multiple, bulls say that premium is deserved. Aaron Rakers of Wells Fargo says the price doesn’t reflect the long-term gross margin expansion, noted the company’s whopping 72.4% gross margin in services.

Investors have often prized Apple for its consistent sales growth and hefty cash balance. Analysts also pointed to the high-growth opportunities in its potential venture into autonomous vehicles and its planned foray into the metaverse via augmented reality and virtual reality products.

The blowout quarter and outlook is also putting Apple back on path to a $3-trillion market value — a milestone that was in touching distance just a few weeks back. The stock, which finished on Thursday just above $159, would need to reach almost $183 to get there. At least 20 analysts, or roughly half of those with price targets tracked by Bloomberg, see Apple surpassing the milestone in the next 12 months.

Despite the tech pullback and Microsoft’s rally, software stocks are still expensive versus pre-pandemic levels on a forward sales basis, indicating there may be more pain ahead.