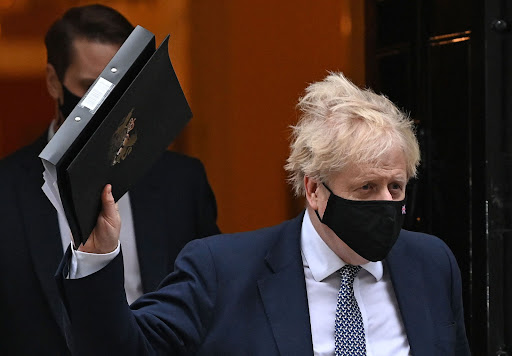 A UK government probe into alleged rule-breaking parties in Boris Johnson’s office during the pandemic could be stripped of key details at the request of the police, potentially handing the prime minister a boost as he tries to persuade his Conservatives not to mount a leadership challenge.

Facing a major public backlash, Johnson commissioned the civil service to look into reports he and his staff broke coronavirus lockdown rules with various events in Downing Street. The report, by senior civil servant Sue Gray, was expected to be published this week.

But the decision by London’s Metropolitan Police to start its own probe into some — but not all — of the alleged parties caused a delay. That’s prolonging the uncertainty at the top of the ruling Conservative Party, with many Tory MPs saying they will wait for Gray’s findings before deciding whether to demand Johnson step down.

The police probe, which was triggered by some of Gray’s findings, led to discussions between the government and detectives over what can now be published to “avoid any prejudice” to the criminal probe.

“For the events the Met is investigating, we asked for minimal reference to be made in the Cabinet Office report,” the police said in a statement on Friday.

While the police said it has not asked for Gray’s report to be delayed, the statement makes clear that if it is published before the criminal probe, it’s likely to be without the potentially most damaging elements for Johnson.

The prime minister has pledged to make a statement to parliament soon after Gray’s report has been released. But that moment will not be as politically seismic as anticipated if she has not been able to address key events. Accusations of a whitewash would undoubtedly follow.

It’s also possible that Gray could delay publishing her report entirely until the police has finished their probe, rather than release incomplete findings.

Either scenario could benefit Johnson. A report without the most damaging findings would be less likely to trigger a broad Tory rebellion against him. Likewise a delay buys him more time to attempt to talk round potential rebels, including with policy pledges.

Last week, Johnson’s premiership appeared to be in grave danger as several Conservatives publicly called on him to resign and others gathered behind closed doors to discuss his ousting.

But with so many Tories saying they want to see Gray’s report, the rebels have been forced into a waiting game. The Met’s statement suggests that is likely to continue.