Some airlines are altering schedules, though flights into and out of Ukraine are continuing as standoff with Russia continues 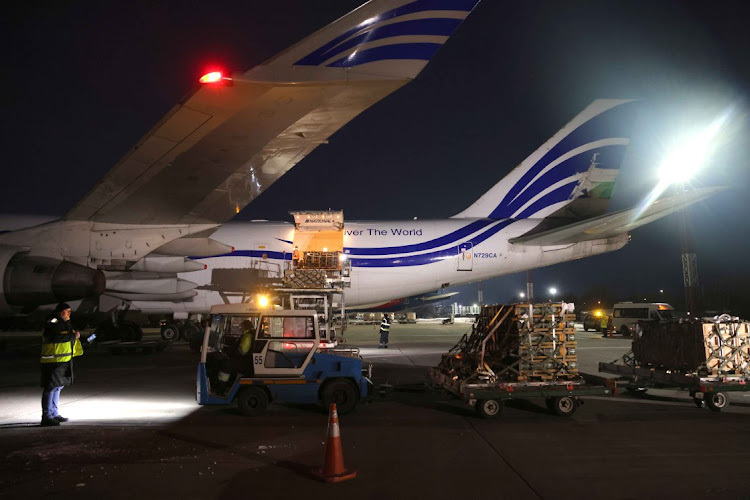 Ground crew unload weapons and other military hardware delivered by the US military at Boryspil Airport near Kyiv on January 25 2022. Picture: SEAN GALLUP/GETTY IMAGES

Airlines are altering schedules to limit their exposure to Ukrainian airspace, though flights into and out of the country are continuing as its standoff with Russian troops massed at the border intensifies.

Ryanair, Europe’s largest discount airline, has reduced the number of flights to and from Ukraine, according to a spokesperson.

“The safety of our passengers and crew is our number one priority and we will continue to monitor our schedules and adjust accordingly,” the Irish carrier said in an emailed statement on Thursday.

Lufthansa and its Swiss and Austrian units have switched some flights to Kyiv from evenings to mornings due to safety concerns, allowing crew to avoid staying overnight in the Ukrainian capital, a spokesperson said. Dutch carrier KLM is doing the same, Interfax-Ukraine reported this week.

Carriers have generally avoided overflying Ukraine since a Malaysia Airlines jetliner was shot down over separatist-held territory over the eastern part of the country in 2014. Commercial flights are still prohibited over eastern Ukraine and Crimea.

International investigators concluded that Malaysian Flight 17, en route from Amsterdam to Kuala Lumpur, was brought down by a Russian-made surface-to-air missile. President Vladimir Putin rejected allegations that Russia was behind the action.

Diplomats are working to defuse the latest crisis, which has seen the build-up of more than 100,000 Russian troops on Ukraine’s border. On Thursday, US President Joe Biden repeated warnings that Russia could invade Ukraine next month. Russia has denied it plans to invade.

Canadian aircraft operators were advised on January 19 not to fly over southern and eastern parts of Ukraine “due to the potential risk from heightened military activity and dedicated anti-aviation weaponry in eastern Ukraine.”

Carriers including LOT Polish Airlines and Hungary’s Wizz Air have said they’re keeping up direct flights to Ukraine but were ready to change plans if necessary.

“We continue to monitor the situation closely in Ukraine, however we have not made any changes to our schedule,” Wizz said.

The European Union Aviation Safety Agency is also monitoring, in co-ordination with the aviation industry and the European Commission, said a spokesperson.

Willie Walsh, the director-general of the International Air Transport Association, said the airline trade group is working with Eurocontrol, which oversees European airspace, to ensure traffic that needs to get into and around Ukraine can avoid areas of potential conflict.

“This is a region of the world that has seen issues in the past,” Walsh said at a January 25 briefing. “Most airlines have significantly reduced the amount of traffic going through the airspace and that’s been the case for a number years.”