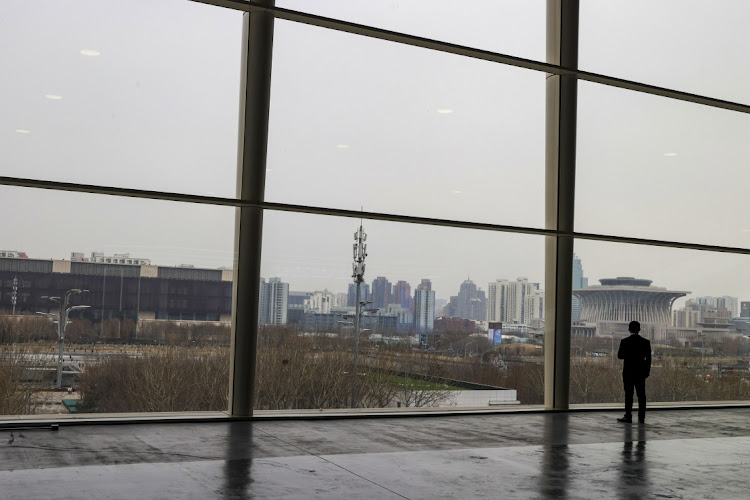 A man looks out the window on the second floor of the Main Media Center in Beijing, China. Picture: GETTY IMAGES/TASOS KATOPODIS

Global banks are raising concerns with Chinese authorities about a plan to tighten rules on overseas stock listings, saying the draft rules are ambiguous and will expand Beijing’s regulatory reach outside the nation’s borders.

The proposals will also drive up costs and stymie deal making, the top lobby group for financial firms in Hong Kong said in a letter to the China Securities Regulatory Commission on Sunday, according to people familiar with the matter. The letter called for more clarity on filing requirements and what constitutes violations, the people said, asking not to be identified as the matter is sensitive.

A media representative at the lobbying group — the Asia Securities Industry & Financial Markets Association — and the CSRC declined to comment.

Pushing back against China is fraught for Wall Street banks and their European rivals, all of which are seeking to build major franchises in investment banking and asset management in the world’s second-largest economy. But at stake is an earnings juggernaut that has seen hundreds of Chinese firms, including behemoths such as Tencent Holdings and Alibaba Group, list overseas over the past two decades. Investment banks have made more $6bn from such deals since 2014.

China unveiled its plan for sweeping new regulations for overseas share sales in December. Beijing has become concerned about leaks of sensitive data overseas, empowering a cybersecurity regulator to police who can go public abroad. The push is part of a broader clampdown on big technology firms that has included huge antitrust fines and the halt of the $35bn initial public offering by billionaire Jack Ma’s Ant Group.

Banks say China’s latest draft rules, which were issued for public comment, will increase operational costs and introduce hard-to-navigate regulations for firms operating in Hong Kong or other places outside mainland China, according to people familiar with the concerns.

The lack of implementation details and vague wording in the document is causing angst in the investment banking community, the people said. One rule bans Chinese firms from listing overseas if they, or their major shareholder, have committed a criminal offence of “disrupting the order of the socialist market economy”.

Global banks are concerned their licences could be easily revoked and that individual bankers may also face risks, the people said. In its letter, ASIFMA, asked the CSRC to help banks better understand what constitutes national security concerns.

The draft rules also stipulate that foreign securities firms can be punished for “disturbing the domestic market order”, an undefined phrase used repeatedly in the draft. Potential penalties include a suspended licence or the forfeiture of as much as 10 times the income earned.

ASIFMA questioned the necessity of the wording, saying that since offshore listings target buyers in mature and well-regulated markets they should have limited domestic impact in China.

Bankers also questioned the practicality of a proposal that will require companies to provide filing materials, including regulatory opinions or approvals by industry authorities and a “safety assessment review”, to the CSRC within three working days of an overseas submission. The group urged regulators to limit the rules to IPOs instead of encompassing all kinds of capital market activity, one of the people added.

While banks understand the rules are well intentioned, there’s concern over unintended consequences, the people said. Senior dealmakers at three global banks also said the requirement for issuers to consult industry regulators for opinions is impractical since only a few industries such as telecommunications and the food sector have direct oversight.

Banks face a tricky balancing act as they navigate an increasingly tense relationship between Beijing and Washington. China has been opening its financial markets to foreign firms, seeking to bring in more capital to its domestic market, build up financial centres in Shanghai and Shenzhen, and keep more of its juggernauts listed at home.

At the same time, the US has been sanctioning major Chinese firms for their ties to the military and in some cases seeking to delist them. China Mobile, the country’s largest wireless carrier by sales, was removed from the US stock market last year. It later raised more than $8bn in Shanghai, the biggest listing in China in more than a decade.

Asia leads the way in the largest equity deals of 2021