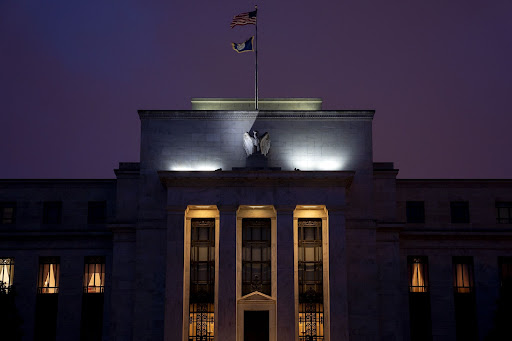 The Federal Reserve building in Washington, DC, the US. Picture: BLOOMBERG

The Federal Reserve took a key step towards the possible issuance of a US digital currency, a move that the central bank said could dramatically alter the American financial system.

The Fed on Thursday solicited feedback through a 35-page discussion paper on a government-backed coin, known as a central bank digital currency (CBDC). As expected, the central bank made no firm conclusions on whether the US should issue a digital dollar and said it didn’t intend to proceed without clear backing from the White House and Congress.

“The introduction of a CBDC would represent a highly significant innovation in American money,” the Fed said in the paper.

The Fed, which will take input until May 20, said it preferred that lawmakers pass legislation to authorise the currency. The central bank outlined a series of potential benefits from a US-backed coin, including ensuring the dollar remains the pre-eminent currency in the international financial system. The central bank also said a CBDC could improve cross-border payments, increase financial inclusion and ease the use of greenbacks in new technology.

However, the central bank also warned of possible negative effects, including draining deposits from traditional banking and making runs on financial firms more likely or more severe. Another concern has been privacy, since the government could have a direct view into individual citizens’ transactions. The report offered few details on how that could be resolved, saying the Fed “would need to strike an appropriate balance between safeguarding consumer privacy rights and affording the transparency necessary to deter criminal activity”.

Also, the infrastructure of this new system could be a tempting target for hackers. So, shielding a Fed CBDC could be “particularly difficult,” the report said because it would “have more entry points than existing payment services”.

A Federal Reserve official on a call with reporters said the central bank will assess next steps after the comment deadline, but didn’t offer a timeline for when a digital dollar could ultimately be implemented.

The paper is the result of a strong pivot towards deeper engagement on digital payment systems by chair Jerome Powell in May. A separate paper on the technology that could run a central bank digital currency is expected from the Boston Fed soon.

The paper comes as central banks around the world, most notably the People’s Bank of China, move ahead with their own digital currencies.

In 2022, China has ramped up a pilot of a digital yuan and is expected to trumpet its use at the Beijing Winter Olympics in February. Some experts say China and other early adopters of digital currencies could set standards for other countries, in part because different countries’ digital currency systems would eventually need to co-ordinate for cross-border payments.

That could make the Fed’s research important even if a US digital dollar didn’t launch for years, since many countries would seek to tailor their own systems to integrate with the US.

In the absence of a Fed-issued digital dollar, private companies have launched their own version in the form of stablecoins that hold reserves meant to ensure the coins can be exchanged for fiat currency on a one-for-one basis.

Cryptocurrencies bear the hallmarks of a pyramid scheme and undermine  sovereignty of monetary policy, says Bank report
News
3 months ago

The fight to control the $2-trillion market is heating up, and China and the US are taking different measures
Companies
7 months ago
Next Article