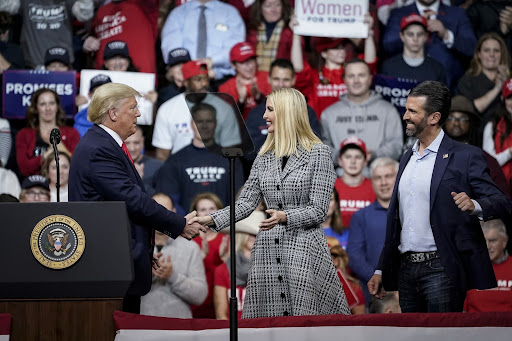 New York’s attorney-general has asked a judge to order Donald Trump and two of his adult children to testify under oath as part of the state’s civil probe into the family real-estate business, saying investigators have already uncovered a pattern of potential fraud.

Attorney-general Letitia James, the state’s top law enforcement officer, on Tuesday night filed a motion to compel the former president, along with Donald Trump Jr and Ivanka Trump, to hand over documents and answer questions about a series of valuations of key properties of the New York-based Trump Organization.

The attorney-general’s office “has developed significant additional evidence indicating that the Trump Organization used fraudulent or misleading asset valuations to obtain a host of economic benefits, including loans, insurance coverage, and tax deductions”, according to the filing.

The civil investigation has emerged as one of the biggest legal threats to Trump as he weighs another run for the White House in 2024. The probe already helped lead to a separate criminal tax case against the Trump Organization led by the Manhattan district attorney’s office, and could trigger additional criminal charges or a civil lawsuit by the state.

James, a Democrat and frequent critic of Trump, was responding to a motion filed earlier in January by the Trumps seeking to quash the state’s subpoenas on the grounds that the investigation is allegedly politically motivated. A judge has already rejected that argument at least twice earlier in the probe. James has not completed her investigation or formally accused Trump of fraud.

James is mischaracterising a “routine motion” as a “smoking gun” for political purposes, Trump’s lawyer, Alina Habba, said in an email reiterating Trump’s claim that James started the investigation to advance her political career.

“This is merely the latest in a long line of unfounded attacks against my client and an obvious attempt to distract the public from her own inappropriate conduct,” Habba said.

Among other things, Trump’s financial filings have “misstated objective facts, like the size of Mr Trump’s Trump Tower penthouse” and “miscategorised assets outside Mr Trump’s or the Trump Organization’s control as ‘cash’, thereby overstating his liquidity,” James said in a statement.

James noted in the filing that another family member, Eric Trump, had already been ordered in 2021 to sit for a deposition after he initially balked. The former president has filed a separate suit against James seeking to derail the investigation. That case is pending in federal court in Albany.

James said the probe revealed that so-called statements of financial condition that described Trump’s valuation process do so “in ways which were often inaccurate or misleading when compared with the supporting data and documentation” that the company supplied to accountants.

“Subpoenas to current and former top company officials — such as those at issue here — are routine in complex financial investigations and are amply warranted here,” James said in the filing.

She began the probe in 2019 to determine if Trump’s company had been manipulating the value of key assets. Trump’s former lawyer and fixer Michael Cohen triggered the investigation after he handed Congress a trove of Trump financial records and testified that his former boss “inflated his total assets when it served his purposes” and “deflated his assets to reduce his real estate taxes”.

In July, then-Manhattan district attorney Cyrus Vance Jr, in co-operation with James, charged the Trump Organization and its longtime CFO, Allen Weisselberg, with an array crimes associated with untaxed benefits the executive had received, including the use of luxury cars and apartments. Weisselberg and the company have denied wrongdoing.

A major focus of the James probe has been the Trump Organization’s appraisal of Seven Springs, a 86ha estate in Westchester County, New York. Her office has been trying to determine whether the company gave an accurate valuation for the property when it served as the basis for about $21.1m in tax deductions for donating a conservation easement for the 2015 tax year.

Trump’s 40 Wall Street skyscraper and his Chicago hotel are among the other properties being scrutinised in the attorney-general’s probe, which overlapped with the Manhattan district attorney’s broad investigation of possible bank, mortgage and tax fraud.

Letitia James is conducting a probe into the Trump Organization focused on whether the firm had manipulated the value of key assets for tax and ...
News
4 months ago