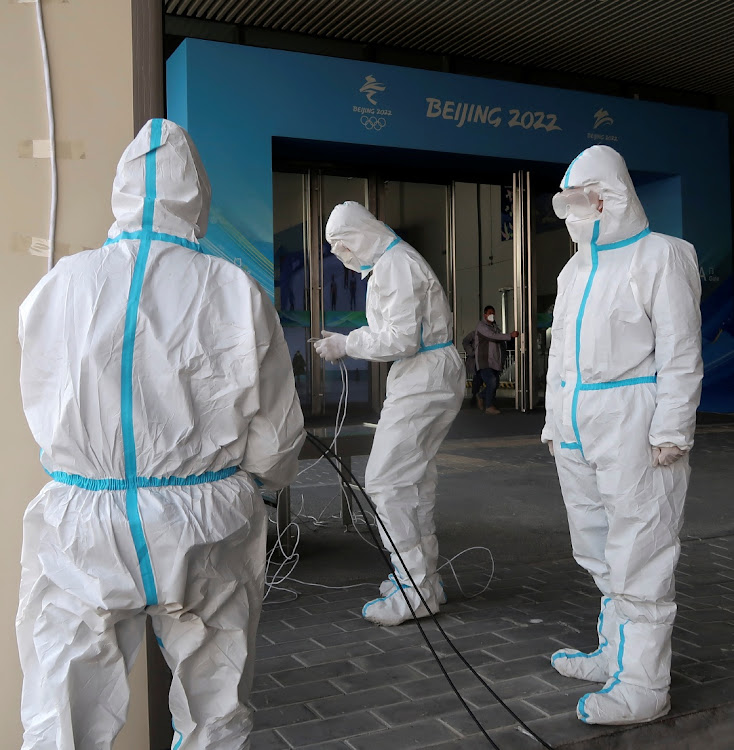 Workers in protective suits set up a metal detector at a check point ahead of the Beijing 2022 Winter Olympics in Beijing, China, on January 18 2022. Picture: FABRIZIO BENSCH/REUTERS

China’s highly guarded capital is seeing signs of further coronavirus spread, with new cases of both the Omicron and Delta variants found less than three weeks before the Winter Olympics.

Beijing’s first Omicron patient has passed the virus to at least two close contacts, according to the health commission. Separately, a person in a different part of the capital tested preliminary positive for Delta, city spokesperson Xu Hejian said at a briefing on Tuesday.

The infections come despite aggressive measures aimed at preventing an incursion into Beijing and a vow from Chinese officials to eradicate the virus by all means, including multiple rounds of mass testing, aggressive contact tracing, quarantine and lockdowns when outbreaks occur.

The flare-up has also dulled the outlook for the Olympics that are due to start on February 4 and were seen as an opportunity to showcase China’s economy and governance. Organisers have halted ticket sales to the public and will instead invite select groups of spectators to attend, provided they obey strict precautions.

Beijing is facing “dual pressure” from imported infections and a local spread, Xu said at the briefing. “The new cases are once again reminding us of the complexity, arduousness and challenges of epidemic prevention and control. All departments must be prepared for emergency response and strict guard against the virus by all means.”

Authorities have asked all inbound passengers to Beijing to get an additional Covid-19 test within 72 hours of arrival, starting on January 22, after its first Omicron infection was reported on Saturday. They already are required to have a negative test within two days of travelling to the city and a green health code that shows they haven’t been in any high-risk environments.

The capital also urged its residents to minimise international purchases and take extra precautions when opening packages from overseas. The person who contracted the first known Omicron infection in Beijing received international mail, which subsequently tested positive for the virus.

Chinese authorities sealed off an office building near Beijing Capital International Airport on Tuesday after learning contaminated mail from overseas arrived on the premises, according to the local government. A total of 1,070 people were asked to remain in the building until their Covid-19 tests and environmental samples came back negative.

Even when prior infections were factored in there was a 25% lower risk of dying in wave four than wave three, researchers said
News
5 months ago