Chinese President Xi Jinping called on nations to secure global supply chains and prevent inflation shocks, as the leader of the world’s second-largest economy seeks a smooth path to clinching a precedent-defying third term in power.

“We need to resolve various risks and promote the steady recovery of the world economy,” Xi said at the World Economic Forum (WEF) via video link on Monday, the third time the Chinese leader has addressed the event.

“The global industrial and supply chains have been disrupted,” he added. “Commodity prices continue to rise. Energy supply remains tight. These risks compound one another and heighten the uncertainty about the economic recovery.”

An energy crunch in China’s border nation Kazakhstan led to Russian troops being enlisted to help crush a public uprising earlier this month, bringing supply chain risks to Beijing’s back door. China is seeking to eliminate economic and diplomatic risks as Xi prepares to keep power at the ruling Communist Party’s leadership congress in the second half of this year.

“If major economies slam on the brakes or take a U-turn in their monetary policies, there would be serious negative spillovers,” he said. “They would present challenges to global economic and financial stability, and developing countries would bear the brunt of it.” 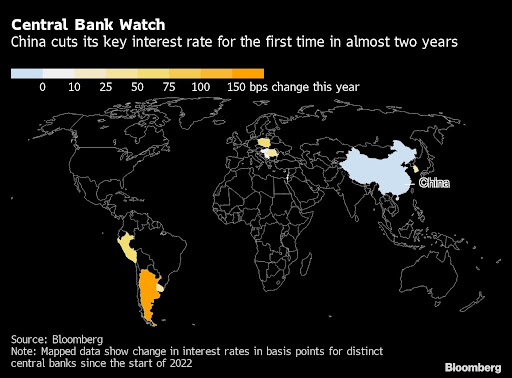 On China’s economy, Xi downplayed concerns even after data on Monday showed growth slowed to 4% last quarter, the weakest pace since early 2020.

“The fundamentals of the Chinese economy are unchanged — it remains resilient, has sufficient potential and its long-term prospects are positive,” he said.

Xi called for co-ordination on global economic policy, just as China and US diverge on key policy steps. China’s central bank cut interest rates for the first time in almost two years on Monday, while the US Federal Reserve has signalled rate hikes in coming months.

“We should co-ordinate the targets, intensity and rhythm of fiscal and monetary policies and major developed countries should control the spillover effects of their policies to avoid shocks to developing countries,” Xi said.

Indian Prime Minister Narendra Modi and German Chancellor Olaf Scholz are also slated to speak at the virtual event that runs from January 17 to 21. While the summit usually draws the global elite to the Swiss ski resort of Davos for a week of schmoozing, it has shifted online for the past two years due to pandemic restrictions.

What the move by the People’s Bank of China means for the economy and financial markets.

Xi became the first Chinese head of state to address the forum in 2017, days before Trump’s inauguration as US president. At the time, he warned against a trade war and condemned protectionism, only for Beijing to become embroiled in a tariff spat with Washington.

Last year, Xi used the WEF to call on the world to shun an “outdated Cold-War mentality” as he signalled that China will forge its own path regardless of Western criticism, setting the tone for Beijing’s relationship with the Biden administration.

Xi also reaffirmed on Monday that China welcomed “legal” foreign investment, sending a positive signal to investors after a year of punishing crackdowns on sectors including big tech, education and entertainment.

“All types of capital are welcome to operate in China in compliance with laws and regulations and play a positive role for the development of the country,” Xi said.

China’s population crisis continued to worsen in 2021, with the latest birth figures again sliding despite government efforts to encourage families ...
News
4 months ago