Companies may have the decision forced upon them by surging Covid-19 infection rates that have sent absenteeism soaring at plants, hospitals and other workplaces 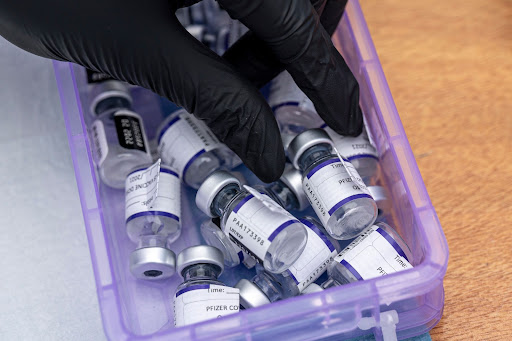 The US Supreme Court may have rejected a federal rule mandating Covid-19 vaccinations or testing, but businesses threatened by Omicron’s spread might be forced to implement one anyway to protect the workers they have and keep factories open.
Image: Bloomberg

The US Supreme Court may have rejected a federal rule mandating Covid-19 vaccinations or testing, but businesses threatened by Omicron’s spread might be forced to implement one anyway to protect the workers they have and keep factories open.

While many companies have already imposed their own vaccine requirements, about one in three employers planned to do so only if the Occupational Safety and Health Administration rule took effect. Those companies now face a decision, one that might be forced upon them by surging Covid-19 infection rates that have sent absenteeism soaring at plants, hospitals and other workplaces.

“With this new variant, employers who were on the fence before about doing a mandate will have to look at whether testing or vaccination will be necessary just to continue operating,” said Rachel Conn, an employment and occupational safety and health (OSHA) partner at law firm Nixon Peabody. “It may be about just keeping the facility open at this point.”

Omicron’s surge has once again delayed companies’ plans to get workers back at their desks and prompted asset-management giant Blackstone to require booster shots to work in its office. More than two dozen industry groups opposed the federal government forcing their hand on Covid-19 policies, but individual companies aren’t necessarily against mandates, especially if they keep business running.

“As a practical matter, employers are looking at how to lower their risk,” said Jeff Levin-Scherz, the population health leader at workplace consultant Willis Towers Watson. “Getting people vaccinated is an important way to prevent Covid-19 from interrupting their business.”

Almost 1.8-million workers were absent in November because of illness, according to the most recent figures from the labour department, and that was before theOmicron variant hit the US. Only 63% of the country is fully vaccinated, according to the Centers for Disease Control and Prevention.

Businesses that were already grappling with inflation, supply-chain snafus and workers quitting in record numbers now have to deal with the rampaging variant as well.

The OSHA rule, pushed by President Joe Biden, would have applied to all businesses with 100 or more employees, requiring about 80-million workers to get Covid-19 vaccines or periodic tests.

The situation is further complicated by a separate mandate for federal contractors, which would affect many of the nation’s largest private sector employers, from defense firm Raytheon Technologies to tech giant Microsoft . That requirement, originally slated to go into effect January 4, remains in limbo after a district court judge halted it last month.

The National Retail Federation called the Supreme Court’s decision “a significant victory for employers,” mirroring comments that trickled out on Thursday afternoon from other industry groups opposed to the rule, such as the American Trucking Association. Businesses were also worried about how the directive would be implemented and enforced, while many employees feared they would have to shoulder the costs of regular testing.

“The big question now is, What are employers going to do moving forward?” Conn said. “A lot of them were on the fence and now will have to make a decision.”

Ford is one of the companies that now has decisions to make. The automaker is reviewing the ruling to see if any changes are needed to its vaccine mandate for most of its 32,000 salaried US workers. It hasn’t required vaccinations for its 57,000 hourly US workers, who are represented by the United Auto Workers union, which opposes mandates.

Businesses that see the need to implement some sort of shot-or-test policy might pursue what employment lawyers are calling an “OSHA light” approach, where employees are allowed to self-report their Covid-19 test results rather than requiring administrative vetting and oversight by an outside party. That might appease some workers, while others might worry that essentially relying on the honour system isn’t enough to keep everyone safe.

“Private sector employers still have the right to roll out and maintain a vaccine mandate policy or a vax-or-test-policy,” said Ian Carleton Schaefer, chair of law firm Loeb & Loeb’s New York employment and labour practice. “The decision point is now squarely left to board rooms and CEOs to decide.”

Earlier this week, the airline chief said about 3,000 of its workers had tested positive for Covid-19, but United’s mandatory vaccination policy had kept the infected out of hospitals.

The carrier’s sick workers are part of the more than 11-million Americans who aren’t working because of the virus, according to the Census Bureau’s latest Household Pulse Survey. (That figure also includes those who refrain from working because they are worried about getting or spreading the virus, and those caring for someone with symptoms.)

As companies weigh their decision, more and more workers will likely fall victim to the virus. Epidemiologist David Michaels, who led OSHA under President Barack Obama and now teaches at George Washington University, said employers who choose not to enforce any sort of vaccine or testing mandate put the economy at risk.

“Many, many workers will continue to be infected, and millions of workers will remain outside the workforce because they are afraid of becoming infected,” he said. “Until we make workplaces safe we won’t be able to bring the economy back to normal or address the very significant supply chain issues that we face right now.”

‘Border controls around the world have dramatically reduced our ability to operate with unvaccinated aircrew’, the airline says
Companies
9 months ago

Government is considering introducing Antigen tests, which can provide results within minutes and are cheaper than the PCR tests
National
5 months ago
Next Article