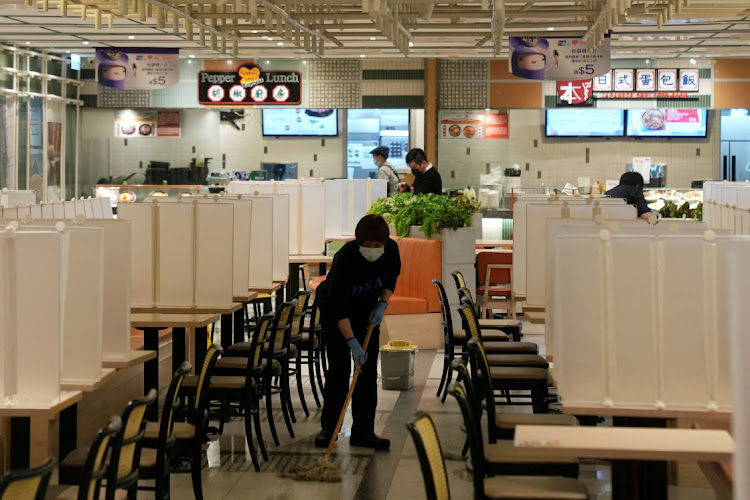 A staff member wipes the floor at an empty food court after evening dine-in services were suspended to control coronavirus infections in Hong Kong, China, in this January 11 2022 file photo. Picture: REUTERS/LAM YIK

The ban on bars, beaches, gyms and cinemas, as well as dining-in after 6pm, will continue until February 3, Hong Kong leader Carrie Lam said at a regular press briefing on Friday. The Asian financial hub will also extend its passenger flight ban on Australia, Canada, France, India, Pakistan, the Philippines, the UK and the US , until February 4, she added.

The government will release HK$3.57-billion ($459m) to help the economy cope with the stringent virus measures that particularly impact the retail and tourism sectors, Lam said. That marks the fifth round of support from the city’s anti-pandemic fund.

The city’s economy is coming under pressure once again, having just rebounded after two previous years of contraction. Morgan Stanley and Bloomberg Economics have already cut their growth forecasts for this year as Hong Kong’s strict adherence to a Covid Zero approach means a delayed opening of its borders with China and elsewhere. Financial secretary Paul Chan, who is set to give his annual budget speech next month, said in a blog post last week that the economy will take a hit from the outbreak of omicron-variant virus cases in the city.

The new virus restrictions started last week and were originally set to last for 14 days. The extension means they’ll be in place throughout the Lunar New Year holiday that runs for the first three days of February.

The move will put a significant damper on the celebrations, which often involve families gathering together in large groups for dinner at local restaurants.

‘From Monday, people can test twice before they go, leaving isolation at the start of day six’
World
2 weeks ago
Next Article