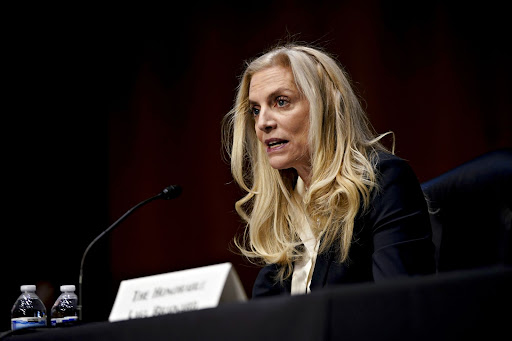 Federal Reserve governor Lael Brainard, who has been tapped by President Joe Biden to serve as vice-chair, said on Thursday that the US central bank won’t tell lenders to avoid fossil fuel companies as some progressive groups have urged.

Brainard’s comments before the Senate banking committee come in the midst of intense debate between Democrats and Republicans over the role the Fed should play in helping tackle climate change.

“We would not tell banks which sectors to lend to or which sector to not lend,” she said Thursday in response to a question during her confirmation hearing. Still, she added that climate change was among the risks that the central bank reviews.

The warming planet will be central to many of the policy debates at the Fed over coming years as the White House has made the issue a top priority. In a sign of things to come, last October, the Financial Stability Oversight Council, which includes the chiefs of Washington’s top regulators, laid out recommendations for how agencies should help tackle global warming.

For her part, Brainard has previously endorsed a role for central banks in combating global warming, saying in 2019 that it was important for the Fed “to study the implications of climate change for the economy and the financial system”. If confirmed, Brainard would not become the vice-chair directly in charge of bank supervision, but she would be involved in any policy votes.

On Thursday, Brainard also weighed in another hot-button issue: the prospect of regulatory reviews as a way to force banks to actively manage the hazards of global warming.

Her comments came after Fed chair Jerome Powell said earlier this week that the central bank is looking at “climate stress scenarios” for large financial institutions, and called those “a key tool” that would be separate from actual stress tests.

On Thursday, Brainard was careful to clarify that she’s “focused on the larger institutions” and doesn’t think such scrutiny is warranted for community banks. She also said she has “not suggested that we should do stress tests for climate” — something that is opposed by financial firms.

However, senator Pat Toomey, the committee’s ranking Republican, said that there’s “little more than a semantic difference” between the Fed’s climate scenario analysis and a full-scale stress test.

Brainard was nominated by President Joe Biden to serve as vice-chair, succeeding Richard Clarida who resigned this month two weeks before the end of his term in the wake of new questions about his personal trading. If confirmed by the Senate, Brainard will be one of Powell’s closest team members on monetary policy and strategy along with New York Fed president John Williams.

U.S. consumer prices soared last year by the most in nearly four decades, illustrating red-hot inflation that sets the stage for the start of Federal ...
News
5 months ago