Delta also announces a special profit-sharing payment of $1,250 per employee set for February 14 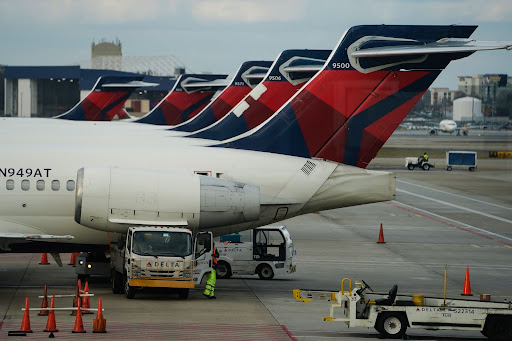 Delta Air Lines says the rapidly spreading Omicron variant will delay a recovery in travel by at least 60 days and contribute to a first-quarter loss but won’t derail the carrier’s expectation to remain profitable for the rest of 2022.

With coronavirus cases expected to peak in the US in the next seven days, the pace of improvement in travel should resume its original December trajectory in the second half of February, Delta said in an earnings release Thursday.

“We still see our President’s Day and beyond booking patterns to be very healthy,” CEO Ed Bastian said in an interview. “People are ready to go, ready to travel.”

The omicron-related pause in recovery for corporate and international travel could last as long as 90 days, Bastian said on CNBC. While the Atlanta-based carrier projected pretax losses in January and February, it forecast a profit in March and meaningful earnings for the final three quarters and full year.

Delta is the first major US airline to report results for a quarter battered by more than 20,000 flight cancellations, according to FlightAware.com. But widely varying employee sick rates among carriers, which continue to ground flights, may mean Delta’s results aren’t the industry bellwether that they typically are.

About 8,000 Delta employees have caught the virus over the past four weeks, Bastian said, though disruptions have decreased in recent days. At its peak in late December and early January, the virus and winter storms forced the airline to cancel as much as 10% of its flights. That shaved about $75m from fourth-quarter revenue and trimmed pretax profit to $170 million from Delta’s earlier forecast of $200 million to $250 million.

Unit costs rose 11.4% from the pre-pandemic fourth quarter of 2019. Delta sees the measure, an indicator of efficiency, rising 15% in the first quarter from two years ago.

“The cost outlook is likely the biggest point of contention for investors, as airlines (not just Delta) have consistently seen higher than expected costs relative to expectations,” Conor Cunningham, an MKM Partners analyst, wrote in a note to investors.

Revenue recovered to 74% of the level in the same period of 2019, pre-pandemic, though international passenger revenue remains at 50% amid continued travel restrictions in some nations. Fourth-quarter domestic business traveller volume was near 60% of the 2019 level.

“If Omicron does recede as rapidly as medical experts are thinking, I’d expect offices will be reopening in the spring and we’ll see business traffic increase from there,” Bastian said.